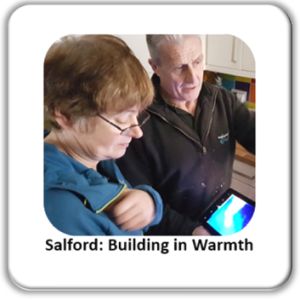 With effects on health, education and employability, fuel poverty affects a growing number of people, with a staggering 15% of households in the Broughton area of Salford classified as fuel poor (figures taken from the Salford City Council – Affordable Warmth, Strategic Action Plan – 2018/2021).

Megan, one of the Energy Champions said “Having those problems resolved, it’s a lot cosier. I’ve told almost everyone I’ve met because it’s been so exciting, I feel quite evangelical about the benefits, just getting small things done makes a difference”

Diane Hubbard, Energy Consultant, Green Footsteps said “It is vital that those undertaking energy efficiency home improvements for vulnerable householders are trained to undertake work to the highest standard. Without this training they not only risk their work not achieving the results they want, but more importantly they can put those living in homes at risk. It’s great to see community initiatives in Salford doing things differently.”

As Aneaka Kellay, Carbon Co-op said “It’s been great to work with Helping Hands, Diane Hubbard and the Community Champions in Salford. We’ve shown that by bringing communities and expertise together, we can make a difference.”