At the end of last month the government released the latest UK poverty statistics. The child poverty figures gained the most attention with the data showing a rise in the number of children living in deep or ‘severe’ poverty. This means that of the 4.1 million children in relative poverty, 2.8 million are in ‘severe’ poverty. There are 3.7 million children in poverty under the alternative absolute poverty measure.

Whilst pensioner poverty has remained low over recent year, there are signs that this is also starting to increase. The graph below shows how the poverty rate varies for different household types: 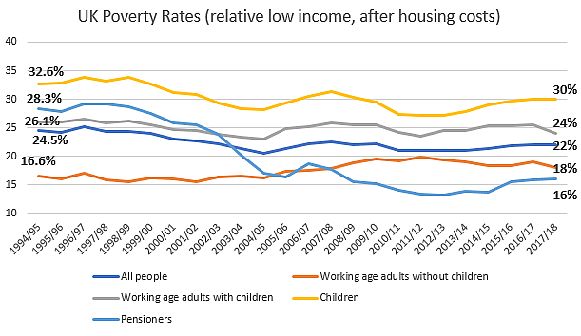 Many readers will be aware of the rise in in-work poverty in recent years. An incredible 70% of children living in poverty are now in households where at least one adult is in work. Whilst children in households where no one is in work are still at greater risk of poverty, the rise of in-work poverty is a sign that employment is not an effective route out of poverty for many families.

The figures also showed a rise in inequality, with the incomes of the rich growing at a faster rate than those on lower incomes.

Some are projecting that the child poverty rate will reach a record 37% by 2022, breaking the record high of 34% set in the early 90s, unless action is taken. In response to the figures being published, End Child Poverty (ECP) called on all the major political parties to develop an ambitious and coherent child poverty reduction strategy ahead of the next General Election. ECP also wants to see an end to the benefit freeze and a full reversal of the two-child limit in his November budget.

GMPA is a member of End Child Poverty and supports these calls. We are highly concerned about the impact of ongoing welfare cuts in Greater Manchester, where an estimated 620,000 residents are living in poverty.