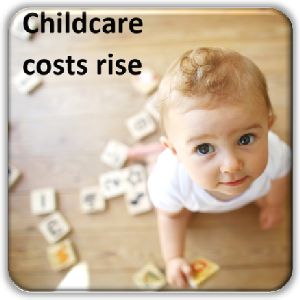 By Hannah May Parlett, Coram Family and Childcare

Britain’s parents are paying 4% more for childcare for children under two, and 5% more for children aged two than they were one year ago, according to the country’s most comprehensive annual survey of childcare costs. Coram Family and Childcare’s 21st annual Childcare Survey finds that parents have faced childcare costs rising well ahead of inflation and are now paying an average of £138 per week – over £7,000 per year – for a part-time nursery place for a child under two (in the North West the figure is £126.43).

Childcare providers are struggling to remain sustainable during the crisis, with 39% of local authorities in England seeing providers in their area raise their prices and 32% reporting that some providers have reduced the number of free early education entitlement places they offer. Furthermore, 30% have seen providers increase the number of children looked after by each staff member.

Despite over a third (35%) of local authorities in England reporting a rise in the number of providers in their area permanently closing in the last year, the majority have not yet seen an increase in shortages of childcare. Over two-thirds (68%) of local authorities in England reported having enough childcare available to meet demand for parents working full time, compared to 56% last year. However this is most likely to be due to decreased demand from families during the pandemic, rather than increases in the supply of childcare, and it is yet to be seen whether there will still be enough childcare places if, and when demand returns to pre-pandemic levels.

Megan Jarvie, Head of Coram Family and Childcare, said: “The pandemic has reminded us all of the vital importance of childcare, in enabling parents to work, boosting children’s learning and narrowing the gap between disadvantaged children and their peers. However the crisis has also exacerbated the issues that exist in the sector. For too many families the system simply isn’t working, and they are left struggling to make work pay after childcare costs or are forced out of the workplace entirely.

“There remains a risk that many providers could close, leaving more families struggling to find the childcare that they need, or that costs could further increase, at a time when family finances have already been stretched by the pandemic. Financial support from the Government has helped childcare providers to stay afloat, but we don’t know what the effects will be when this support ends. We’re calling for the Government to take urgent steps to improve the system now and in the longer-term so that every child can access the high-quality childcare that supports their early development.”

The Childcare Survey 2021 sets out actions that governments can take in the short-term to fix urgent problems in the system:

•  Launch a funding review for the free early education entitlements to make sure that funding levels are sufficient to support the delivery of high-quality education and care, including, but not limited to, issues resulting from Covid-19.

•  Extend the 30 hours free childcare provision for three and four year olds in England and Wales to families where parents are in training, to help boost their employment opportunities.

•  Double the early years pupil premium, to boost outcomes for the most disadvantaged children.

•  Re-allocate any underspend budget for Tax-Free Childcare to other parts of the childcare system – prioritising the most disadvantaged children.