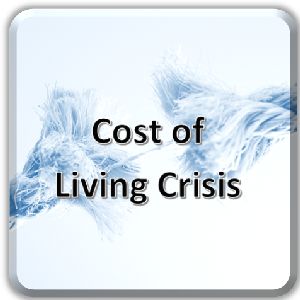 There has been a large amount of evidence published recently highlighting the mounting financial pressures facing households in the UK. Costs generally have been increasing rapidly, with the inflation rate standing at 5.5% (on the CPI measure).

The cost of some essentials is going up by more than that. Campaigner Jack Monroe has highlighted how the cost of basic food items has soared over the last year, at a rate much greater than official inflation figures. The cost of certain food items, such as chicken, beef and butter rose by over 10% in 2021. A litre of petrol increased by 28% over the same period.

As the energy price cap rises in April, people will see their bills soar – up by 50% in some cases. These increasing costs are likely to be exacerbated by the heart-breaking events taking place in Ukraine.

Stating the obvious, these pressures will hit low-and-modest-income households hardest. People who spend a larger proportion of their income on essential items will feel their budgets squeezed more than those on middle and higher incomes.

Just as the energy price cap rises, low-income households will face another real terms cut in income. Benefits are being uprated by just 3.1% in April in spite of the inflation being much higher. The JRF say that 400,000 people could be pulled into poverty and that nine million families who receive benefits due to low incomes will be £500 worse off on average as a result of this real terms cut.

So far, the national policy response has been limited. Government should increase benefits in line with inflation and reverse the £20 per week cut to Universal Credit. This would help alleviate the immediate financial pressures facing low-income households and provide a much sounder foundation on which to build the proper strategy for ending poverty the UK so desperately needs.

Locally it is vital that we focus on maximising household income, providing cash first responses to poverty and boosting financial resilience. That can be done through:

• Promoting and supporting benefit take-up so people are accessing all the benefits they are entitled to. GMPA estimates that the amount of unclaimed benefits in Greater Manchester exceeds £100m per year. Benefits advice and welfare rights services in Greater Manchester bring tens of millions of pounds into the pockets of local residents every year, but there is more we could do.

• Signposting people to financial advice and support, including debt advice.

• By maximising the help people receive through Council Tax Support and effective use of Discretionary Housing Payments. These are aspects of the benefits system that sit with local authorities.

• Providing cash grants rather than in-kind support to people facing financial hardship. This is being done by some councils through their local welfare assistance schemes. VCSE organisations and even some foodbanks are supporting people to access grants.

• Making use of support available from utility companies. For example, United Utilities offer a range of different types of help to people who are struggling with their bills.

Through these local actions we can do what we can, to protect people from the cost-of-living crisis.