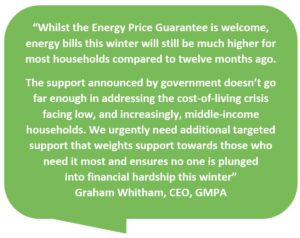 The Government recently announced the Energy Price Guarantee, to be introduced from October 1st. Under the guarantee, a typical household will pay up to an average of £2,500 a year for energy for the next two years. Support was also announced that will cap prices for businesses, charities, and the public sector organisations for 6-months.

We are fast approaching what is going to be the most difficult winter in decades. Whilst the Energy Price Guarantee is welcome, it is poorly targeted and will not prevent many low-income households from reaching crisis point.

It is also deeply disappointing that the Government has not announced any further support to help those on the lowest incomes, as energy prices are not the only costs that are increasing. A new up-to-date Cost-of-Living support package must be introduced, as the first part of a strategic response to tackling poverty in the long term.

As part of a comprehensive strategy to deal with poverty, GMPA is calling for:

You can find out more about GMPA’s response to the cost-of-living crisis here.