In June, a mixed method study was launched to understand the obstacles, needs, and prospects of the food support providers active in Greater Manchester immediately after the Covid-19 peak. Food support providers were invited to fill out a questionnaire and to participate in a longer interview online. Of the organisations that responded, 55 completed the questionnaire and 33 agreed to a follow up conversation. Five additional interviews were conducted with sector experts not primarily involved in frontline support, to gain additional insight into some of the findings. Although the sample is mostly composed of food banks, it also includes several responses from food pantries, food clubs and meal providers. Preliminary analyses of the data should be taken with a pinch of salt, as respondents are likely to be self-selecting on certain characteristics of the organisations, which may produce biased responses. Nonetheless the data is useful as a starting point to reflect on the emergency responses put in place, the most common difficulties and the expectations food providers have for the near future.

Let us start with some good news: respondents have not been turning eligible people away due to lack of volunteer and staff capacity, or because of a shortage of food in stock. Despite most organisations declaring that the number of volunteers has decreased during the crisis, the capacity to improvise and quickly adapt to the new circumstances, coupled with the great generosity shown by individuals and companies, has allowed them to respond promptly to the increasing requests of people in need. For instance, many of them shifted logistics operations from food pick up to food delivery to help people that were shielding. It is not by chance that a striking majority claimed to be resilient against the challenges posed by the crisis, talking about a rise in monetary and food donations (Figures 1 and 2). Interestingly, despite many food support providers being forced to shut down after the lockdown due to a lack of volunteers and/or funds, the ‘parallel welfare’ provided by the charities and by mutual aid groups (MAGs) apparently absorbed many needs that emerged after the lockdown.

Figures 1 and 2. “Thinking about the following aspects of your organisation, how have each of them changed since the beginning of the COVID-19 outbreak?”

Yet the necessity to maintain the supply of food at all costs came with some drawbacks. The lockdown measures that followed Covid-19 not only affected the financial stability (Figure 3) and the management of the organisations, but actually undermined the influential ways in which food support providers used to operate – i.e. the “social atmosphere” (see Figure 4). Before the lockdown, a whole series of services were offered in addition to food support that were as important as the food parcels themselves. With 40 of the respondents reporting an increase in the number of clients (Figure 5), due to physical distancing measures in place, other forms of support such as financial advice, empathic listening and human connection were partially or totally lost, just when they were likely to be needed the most.

Figure 5. “Thinking about the following aspects of your organisation, how have each of them changed since the beginning of the COVID-19 outbreak?” 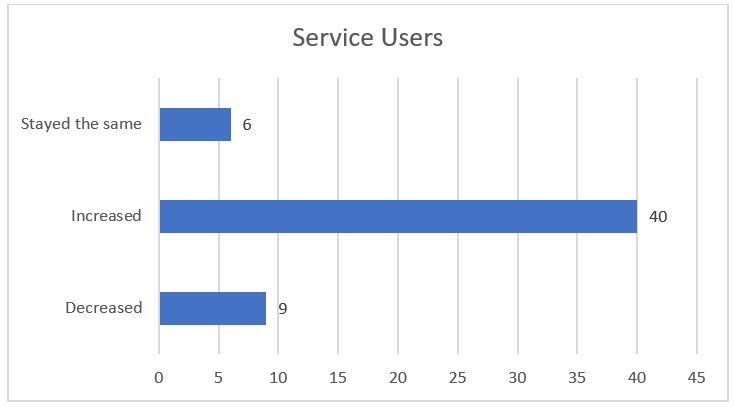 This leads us to another consideration. The exceptional nature of the first Covid-19 wave provoked the exceptional response of charities and public services alike. The sudden growth of MAGs all over the country is probably the most evident sign of this collective effort. Yet many food providers do not know how to project food poverty relief in the future. Especially during the interviews, respondents wondered whether food and monetary donations would increase again should a second lockdown occur, and stressed that the end of the furlough scheme, winter hardships, and the possibility of a no-deal Brexit, will exacerbate the situation for many people that already struggle to make ends meet and increase the number of people in need of food aid. This, in turn, could affect the response capacity of many organisations, some of which have less than two months’ worth of food or cash reserves at current levels of demands (Figures 6 and 7). Hence request of food support providers is the conception of a strategy at both the national and the local level that considers the potential scenarios and responses to a second crisis, to keep the sector afloat regardless of the severity of the upcoming crisis.

Figures 6 and 7. “Roughly, how many weeks will your existing food stocks/cash reserves last at current levels of demand?”

While highlighting the fragility of the UK welfare system, the Covid-19 crisis has also shed light on the resilience of many food support providers, as well as on their complementarity. From more formal organisations, to less structured and extremely agile ones, food support providers have played a central role in the first phase of this major crisis. Yet the solidity of a social contract between the state, businesses and social groups cannot rely on a sector of the economy, no matter how well organised, intentioned and funded, for shielding the most vulnerable from poverty, precisely because food aid should be a very last resort, and not the central backbone of the social welfare.

This research is supported by the H2020 Marie Skłodowska-Curie Fellowship (Grant Number 838965).