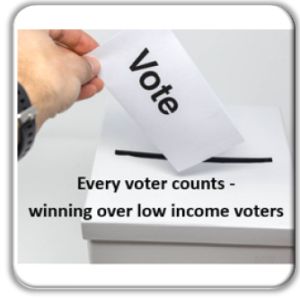 With a General Election looming, Frank Soodeen from Joseph Rowntree Foundation looks at the importance of low income voters to political parties.

At the start of this election season the Government re-announced that the four- year benefit freeze would come to an end in April of next year. The welcome move will hardly make up for the substantial losses that many households on low incomes endured in the wake of the financial crash and especially since 2015. But the timing of the announcement is significant, signalling that appealing to low income voters is now on the agenda of all the major parties. The contrast with the 2015 election, when the question of taking £12bn out of the social security budget was a major dividing line, could hardly be starker.

So why the difference? There’s been a lot of commentary recently about the extent to which Brexit is shaking up the traditional voting axes – rather than the conventional left-right divisions and class oriented voting preferences analysts argue that the electorate is now polarised between leave and remain; open and closed; and liberal and authoritarian tendencies. We’ll soon see whether any of these hypotheses are right but what is certain is that politicians are recalculating their routes to power.

Recent research by the Joseph Rowntree Foundation suggests that the choices of low-income voters will be a key determinant of the eventual outcome. For several years JRF has tried to understand better what the 9.5 million voters living in low-income households think about their lives and prospects. We do this for two reasons. First, to persuade those running the country to pay more attention to the needs and aspirations of this key demographic and second, to guide our own policy and campaigning work.

Our latest report in this strand of work Every voter Counts, took it a step further, quantifying for the first time the extent to which low income voters could swing the election either way. New estimates suggest that there are approximately 9.5 million such voters in Great Britain, and they are voting in greater numbers. Between 2015 and 2017, low-income voter turnout increased by seven percentage points, the first noteworthy rise for 30 years. And, in a recent poll, 59% of low-income voters who had not voted in the 2017 election said they now planned to vote at the next one.

Separately our research partners at Hanbury Strategy developed an original framework for thinking about the next contest based on seat demographics and past elections. Current polling suggests that numerous seats in Scotland, the West Country, and Remain heartlands may change hands. What happens in three distinct types of constituency in England and Wales which Labour currently hold will therefore play a major role in determining the occupant of Number 10 after the next election. Of these 109 seats, 40 have more low-income swing voters than the 2017 majority achieved.

Like everyone else, low-income voters will vote for parties that are nearest to their values and attitudes, and those of the social groups they identify most closely with. These decisions are shaped by personal circumstances, the health of their respective communities, and the experiences and views of friends, families and neighbours. On many questions about how society should be run, low-income voters don’t appear to have a dramatically distinct set of preferences compared with the average voter. But the struggle of living on less than everyone else gives rise to specific considerations around the cost of living, health, and housing especially, with Brexit being important but not that important to this group of voters.

The striking finding from the research JRF has commissioned is just how disillusioned many people are. Distrust is high, and the current parliamentary fractures are serving to reinforce an existing perception that politics is not working well for people on a low income. Whether it is ‘a country that works for everyone’, ‘for the many not the few’, slogans will need to be backed up by reality if the voter coalitions assembled for this election are to hold.

The full report is available here