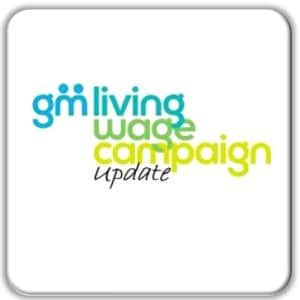 As Greater Manchester (GM) emerges from the lockdown, we will need to work to make sure the coming recession doesn’t mean a race to the bottom for workers in GM.  We need to work together to ensure that we deliver the ‘Better’ in the #BuildBackBetter strategy and build back in a way that protects and improves the conditions and pay of our lowest paid workers. We need to support the key workers who have supported us all through this crisis and campaign to make sure that at the very least, they are paid the Real Living Wage. We need to ensure that we do not retreat in terms of numbers of already accredited Living Wage Employers and that we seek to protect the most vulnerable workers in those sectors that have traditionally paid people low wages.

What does this mean for the campaign for decent work for all workers in GM in general, and the campaign for a Real Living Wage in particular? These themes were discussed at a webinar on July 8th organised by the GM Living Wage Campaign on the topic of decent work, the Real Living Wage and the post lockdown GM economy.  Follow this link to see discussion and hear from our panel made up of Jenny Martin from Unison NW, Amy Rothwell from Boo Consulting and Graham Whitham from GMPA.  We were also joined in the discussion by Greater Manchester Mayor Andy Burnham.

Following on from the webinar, we are continuing the discussion and debate and in the coming weeks we will be publishing a series of podcasts of our conversations with people involved in these key issues. The first of this series of three is a discussion I had with Andy Burnham, where we covered a range of topics that will be interest to those supporting the living wage campaign in GM but also to a much wider audience.