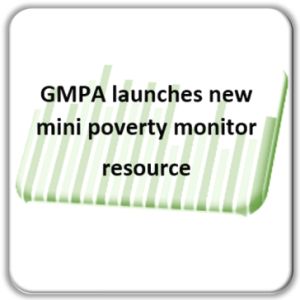 At GMPA we have developed a new page on our website detailing some of the key statistics about poverty and people’s experiences of living in Greater Manchester. The aim of the ‘Mini Poverty Monitor’ is to support people to access data about poverty quickly and easily. Data is provided either at a Greater Manchester level and/or a local authority level (detailing statistics for each of the ten GM boroughs).

The page is broken down into seven sections: Child poverty, Housing, The labour market, Social security, Education, Health and Fuel poverty, food poverty and the poverty premium. The monitor does not present an exhaustive list of statistics relating to poverty in Greater Manchester, but it is a snapshot of key indicators that we know are of interest to members of our network.

The poverty monitor highlights the stark differences in the experiences of people living in different parts of Greater Manchester. Drawing on a range of existing datasets the monitor shows that:

The data masks some of the huge inequalities within boroughs, including those local authority areas that are often perceived as more affluent. For example, in Trafford the ward with the highest rate of child poverty is Clifford ward where nearly half (48.2%) of children are in poverty. This contrasts with Timperley ward which has the lowest child poverty rate in the borough (15.2%).

GMPA is calling on each of the ten local authorities and the Greater Manchester Combined Authority to develop robust anti-poverty strategies and appoint a lead for tackling poverty. This would ensure that poverty doesn’t ‘fall between the cracks’ of different local authority agendas, that effective local efforts to tackle poverty are scaled up and replicated more quickly and help create a unified voice against poverty across Greater Manchester.

We know from our network that there are some exciting initiatives in different parts of Greater Manchester seeking to address poverty and give everyone a fair chance in life.

If you have any comments about the Mini Poverty Monitor please contact us by email.  GMPA is keen on developing a more comprehensive poverty monitor in the future. Please contact us if this is something you could support us with.