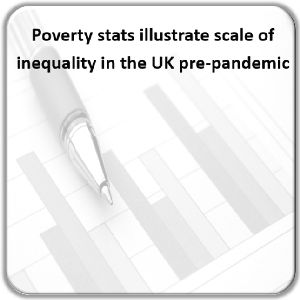 At the end of March, the Government released the latest official statistics detailing levels of poverty in the UK. This data covers 2019/20, therefore providing us with a snapshot of poverty levels right up to the eve of the pandemic.

The data shows that 14.5m people were living below the poverty line in the UK in 2019/20. Of concern is the rise
in child and pensioner poverty, with the percentage of children and pensioners living in poverty now back at
pre-financial crisis levels (as illustrated in figure 1). 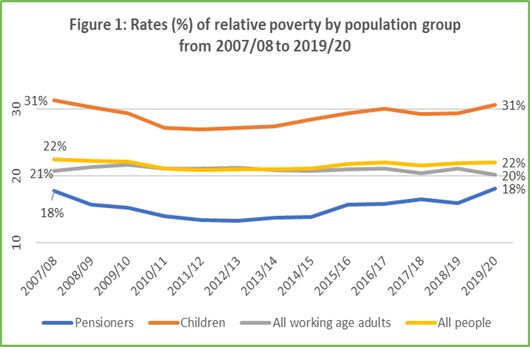 Looking at child poverty data specifically, we are starting to see the impact of the policy to restrict benefits to the first two children in a family that was introduced in 2017. As shown in figure 2, whilst children in families with three or more children have always been at greater risk of poverty, the gap had narrowed significantly in the years up to 2012/13. In the year from 2018/19nto 2019/20 the poverty rate for families containing 3 or more children shot up from 42% to 47%, whilst it remained stable for families with one or two children. 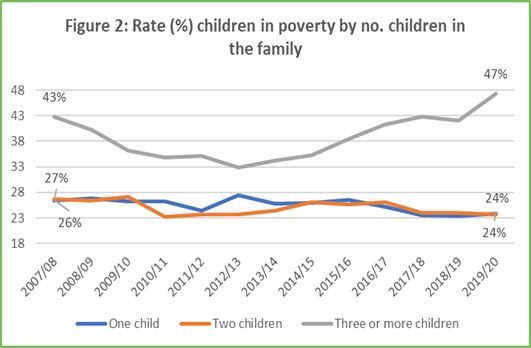 The data highlights a number of other disparities between different groups of the population. In 2019/20:

• Lone parent families were nearly twice as likely to be in poverty than couple families.

• 51% of all children in poverty were in families with a youngest child aged under five.

• Poverty rates were highest for people in households where the head of the household is from the Pakistani or Bangladeshi ethnic groups and lowest for those from White ethnic groups.

• 46% of social renters and 33% of private renters were in poverty, compared to 12% of owner occupiers.

• The proportion of children in poverty living in households where at least one person was in work was 75%.

What can be done?

These inequalities between different groups of the population aren’t inevitable. An increase in Child Benefit of
just £10 per week would cut child poverty by 450,000. Scrapping the two-child limit would stem increases in child poverty. Addressing low pay would drive down in-work poverty. Reforming Universal Credit so it provides a proper safety net would stop people being plunged into hardship when they lose their job or have their hours cut.
Increasing the availability of social housing and improving the rights of tenants in the private rented sector would address the link between poverty and housing tenure. Further improving the availability of childcare support would help address poverty among lone parents families and families with young children. This data should be driving the national responses to poverty and, in the aftermath of the pandemic, it is more important than ever that we have a coherent national play for tackling the issue. 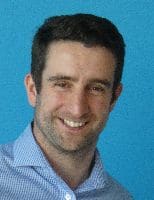 NB: The data presented in this article is for poverty measured as those household living below 60% of median income after housing costs have been taken into account. This is the main measure of poverty used by campaigners. There is a wealth of additional data, using both the main measure and other measures of poverty detailed in the Households Below Average Income report.