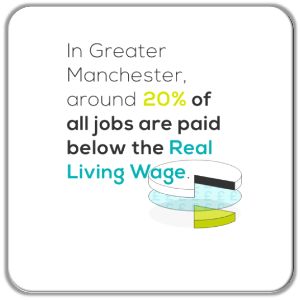 Three weeks on from Living Wage Week (9th to 15th November) we’ve had chance to draw breath and reflect on an incredibly busy and successful week. The week started on Monday with a North West event organised by the Living Wage Foundation. At this event, Steve Rotherham the Liverpool City Region Mayor announced the new real Living Wage rate as £9.50 (£10.85 in London).

At the same event the GM Mayor Andy Burnham called on partners and stakeholders to work together to make Greater Manchester the first real Living Wage City Region in the UK. We are offering our experience, assistance and  support to achieve that ambition as soon as possible. This is a significant step change in the fight against low pay in GM and we look forward to working with many of you in the coming months to make this ambition a reality.

Living Wage Week was obviously very different this year and our Campaign activities focussed on three online events with our partners to highlight a range of issues relating to the Real Living Wage and its importance in building back better from the pandemic:

There were a lot of other things going on. The Living Wage Foundation along with partners in Salford produced a short film promoting the Real Living Wage and Salford’s ambition to become England’s first Living Wage City. You can view the film here.

Our colleagues in the Greater Manchester Housing Providers Partnership (GMHP) (many of whom are already Real Living Wage accredited employers) released a report on the work they have done to support residents into work and the commitment they are continuing to make towards the Real Living Wage movement in GM. The report can be read here.