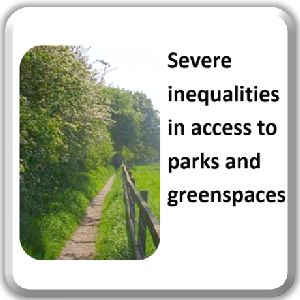 Groundwork Greater Manchester have published the ‘Out of Bounds: Equity in Access to Urban Nature’ report, drawing on evidence and insight from contributors across the green space, health and equalities sectors.

Key statistics brought together in the report show that:

•  29% of people living with a long-term illness or disability had not visited a natural space in the previous month.

But what does the report mean for Greater Manchester?

Michaela Howell, Head of Communities at Groundwork Greater Manchester, explores this question, drawing on three of the reports’ recommendations:

•  We must reimagine urban nature to ensure that it meets the needs and desires of communities today.

•  We must rebalance power in the management of green and blue spaces and build better partnerships.

Why Groundwork is important: