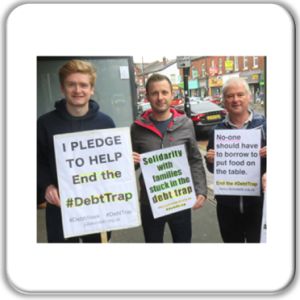 As the campaign launched, Wonga went into administration and pay-day loans capping is now saving families £150 million every year.   In the past year the Financial Conduct Authority (the FCA), the body that regulates the financial services industry introduced a cap on rent-to-own debt businesses (like Brighthouse) as we were demanding.

Instead of a £400 washing machine costing a potential £1,600 or beyond, the maximum a firm can charge will be capped at £800; still a lot of interest, but establishing the principle is a great step forward, and one that couldn’t have happened without thousands of people taking action. The FCA estimates that the cap could save consumers £22.7 million a year.

But there’s more to do. Updated statistics from the Money Advice Service indicated about one in four facing problems with debt and in Greater Manchester 397,600 adults are classified as ‘over-indebted’.   Manchester Central is the most indebted constituency with 32,300.  Many of these are parents so the impact of choosing between heating and eating will hit thousands of children in the region.

In the past year the FCA finished a big review called the ‘high cost credit review’ – a huge opportunity to make some real changes and get a cap on interest and charges across the board. But they didn’t take it. They didn’t introduce a cap on credit cards, overdrafts loans or doorstep lending. It’s not good enough. That’s why JDC is collecting anonymous stories of debt to present to the government and are calling on it to:

• End rip-off lending by capping interest and charges for loans, credit cards, overdrafts and doorstep lending;
• Launch a government inquiry into why so little action has been taken and to put pressure on the Financial Conduct Authority to act. 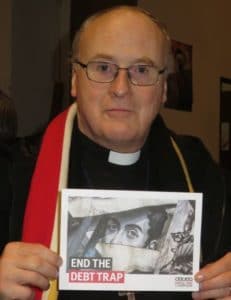 Politicians and leaders need to be encouraged to raise their voices, and reminded to keep on doing so.   With Debt Week 2019 falling during the General Election period, JDC set up an online action which meant hundreds of candidates were lobbied; several locally went out of their way to pledge support.

This campaign continues and JDC will gladly provide materials such as cards and petition forms.  JDC can be contacted via email or call 0207 324 4722.