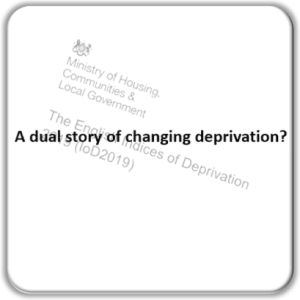 A dual story of changing deprivation? Initial findings from the IMD2019
By  Alex Macdougall – Researcher at the Inclusive Growth Analysis Unit (IGAU), University of Manchester

The end of last month saw an update to one of the more important metrics used by policymakers to understand spatial inequalities, and to target policies in the UK: the Indices of Multiple Deprivation (IMD). This dataset is an area-based measure of relative deprivation, which ranks each of England’s 32,844 ‘neighbourhoods’, or small statistical areas known as Lower-layer Super Output Areas (LSOAs). Each LSOA is home to around 1500 residents. 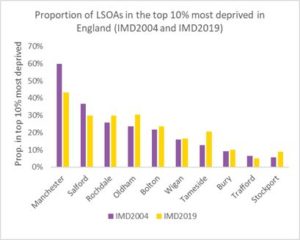 Whilst Manchester has the greatest proportion of neighbourhoods in the most deprived categories, it has also seen the largest relative improvement in GM (see figure). 60% of Manchester’s LSOAs were in the top 10% in the IMD2004, compared to 43% in the recent release. The next largest relative improvement is Salford, dropping from 37% of its LSOAs in the most deprived decile, to 30%.

In contrast, most other LAs in GM have dropped relative to the rest of England. For example, the proportion of Tameside’s LSOAs in the top 10% increased from 13% to 21% across this period, and in Oldham this figure increased from 24% to 30%, and Rochdale from 25% to 30%.

Previous research by the IGAU suggests that these diverging trajectories reflect a dual story unfolding in the city region since the early 2000s . Areas of widespread deprivation around central Manchester have started to break down (although still severe in places), but in many outer parts of the conurbation the situation has remained similar or worsened over the same period (for example, in Central Oldham, or Brinnington in Stockport).

The IGAU will discuss more findings from the IMD2019 in our major forthcoming stocktaking report, which will be launched at our inclusive growth conference on November 19 – 20th, 2019

More information on the IMD2019 and the dataset