What proposals do you think should be made in the next UK White Paper on Social Security (welfare benefits)?

By Michael Orton, University of Warwick

This was the question posed in a workshop attended by a range of Greater Manchester organisations and individuals, held in the summer – and on which there will be further chance to input in coming months.

The aim of the workshop, hosted jointly by Greater Manchester Poverty Action and the University of Salford, was for participants to identify ideas and suggestions for a better social security system.

The workshop covered core issues like Universal Credit and sickness and disability but also a wide range of benefit related topics from carers to sanctions and housing support to tapers. 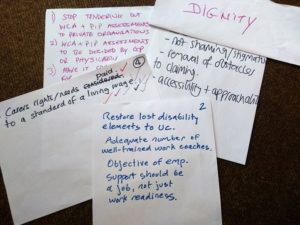 Some points of potential consensus were identified. These included: scrapping the benefit cap and 2-child limit; integration between NHS, job centres and social care; assessments to be done by GPs; ending the Universal Credit 5 week wait; shifting public spending away from crisis intervention to prevention; and a fair tax system in which big corporations contribute and tax evasion is stopped.

The Greater Manchester workshop ended up being one of 17 sessions held in different parts of the country, with a total of just under 300 participants. Outputs were fed into the Commission on Social Security. The Commission also received just short of 900 online submissions, 100+ paper/email submissions and reports and outcomes from a legislative theatre project and a poetry workshop.

So what next? The Commissioners are now analysing submissions and will produce a Green Paper style document setting out initial ideas for consultation. Responses and contributions on that from Greater Manchester will be hugely welcomed. Watch this space!

The workshop was facilitated by Michael Orton, a social policy researcher at the University of Warwick and Secretary to the Commission on Social Security. Any queries to Michael by email.

*The Commission is funded by Trust for London but the Commissioners are keen
to ensure input on as broad a basis as possible, hence the Greater Manchester workshop.