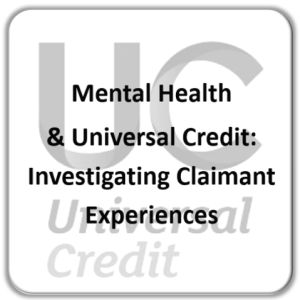 Investigating Claimant Experiences
By Joe Pardoe, PhD Student at the University of Salford

Research has shown that recent changes to the benefits system, especially the roll-out of Universal Credit, have profoundly impacted the UK’s poorest communities. This has been found to partly account for the massive increase in national rates of poverty, particularly child poverty. The link between poverty and health has long been established; a region with a high rate of poverty tends to correspond with a lower standard of general health and mental health.

Prior research has identified various aspects of claiming that may impact upon mental health, such as being subject to the Work Capability Assessment and having to deal with the rigors of meeting conditionality measures to avoid being sanctioned. However, while I am interested to talk about these kinds of issues, I am particularly keen to allow individuals themselves to identify what aspects of claiming Universal Credit may have affected changes to their mental health.

I aim to interview 30 people who have reported changes to their mental health throughout the process of claiming; this may include those with pre-existing mental health conditions, or those who have mentioned experiencing mental health related issues since starting to claim. I am interested to hear from anybody who lives within Greater Manchester and is open to discuss this topic by drawing upon their personal experiences.

The study will explore perceived changes to mental health at various stages of claiming Universal Credit, with a specific focus on:

•  What aspects of claiming Universal Credit may be seen as helping, or being unhelpful, to sustaining a
good standard of mental health

•  How people claiming Universal Credit may feel they are seen by others; both their friends and family, and
by wider society

In order to support this study, I would be very grateful to hear from anybody whose job involves providing some kind of support to people who receive Universal Credit and have experienced changes to their mental health and may be open to being interviewed to discuss their experiences. If you are able to support my research or would like to find out more, please contact me via email

Joe is studying for his PhD within the School of Health and Society at the University of Salford , he is associated with the Sustainable Housing and Urban Studies Unit and supporting the Salford Anti-Poverty Task Force. He gained a 1st Class honours degree in Psychology at the University of Bradford.