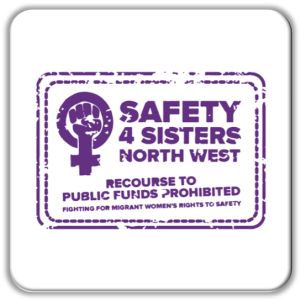 “I have to choose between topping up my phone or food – my phone is my lifeline right now so I chose that.”

These are the words from one of the members of Safety4Sisters Migrant Women’s Support Group, echoing similar statements from other members. Our weekly group meeting, now online, reveals the shocking extent of migrant women’s poverty that has largely been written out of local and national government responses, even under pandemic conditions.

To contextualise, Safety4Sisters is a BME led women’s organisation working to support migrant women survivors of domestic abuse and gender-based violence who have no recourse to public funds (NRPF) delivering casework, advocacy and group support services. Public funds cover the essential welfare system safety net for those in need including housing benefit, universal credit and access to emergency accommodation. This means that women subject to NRPF, a condition of their immigration status in the UK, cannot access lifesaving support systems and housing such as refuges and emergency council housing when leaving abuse, isolating them from support, resources, and government attention. Women therefore face a stark choice – stay in the abuse or leave and face destitution, taking their chances to survive on the street despite the current public health crisis . Positioned at the intersection of race, class, gender and immigration control, women are living in extreme states of poverty and as migrants, many newly arrived in the UK, they have little social or cultural capital to support and anchor them. Some are subject to the asylum process of dispersed housing, often moving several times unable to put down roots. Others are in and out of temporary accommodation, which we – a small voluntary organisation – often have to fund as housing providers are unwilling to support them unless we pay.

The coronavirus has amplified the already challenging conditions forged by years of austerity for women experiencing gender-based violence and crucially those subject to the NRPF rule. Since lockdown we have seen a surge in referrals, the women we work with have endured longer periods in violent households and we have seen a rise in more complex cases. Those on asylum support were living on £37.25 a week and some women were completely destitute relying on charities such as us to provide money and food parcels.  Our forthcoming report, The Pandemic Experiences of Migrant Women, details the struggles our users and our small organisation faced. We found that 53% of women surveyed in our group were in the government risk categories, far higher than the national average – according to the Lancet,  29.1% of the British population have an underlying health condition. Additionally, 90% of the women had experienced food and fuel poverty, and  several women reported an increase in mental distress and suicide ideation. It was no surprise then that women were coming to the group in desperate situations.

With the few support agencies that migrant women could access closing their community doors, access to a hot lunch, travel expenses and a friendly supportive and safe meeting space were non-existent. 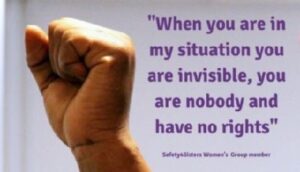 Given the paucity of support agencies available, the lack of consideration for migrant women’s experiences at the local and national level, the acute under resourcing and lack of power of groups, like Safety4Sisters, we should not be surprised when women are left to survive in severe poverty, starving and at risk of street homelessness.

We have to ask ourselves, what did we expect and what do we expect?  Safety4Sisters believe that we can do more and that ‘building back better’ demands that migrant women’s voices and those at the bottom of the pile are embedded in how we now advance as a society.