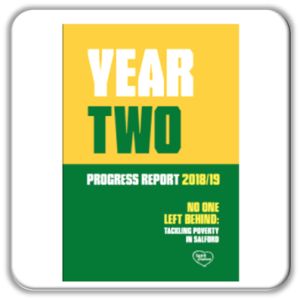 From council tax to cutting the cost of funerals, from boosting benefits to decent pay, Salford City Council is fighting poverty on many fronts.

In 2017, using local people’s first-hand experience and knowledge of areas to address, the council launched No-one Left Behind to tackle poverty in the city.

The campaign won national recognition in the Municipal Journal Awards last June and praise from the Money Advice Service but City Mayor Paul Dennett says there’s no room for complacency.

“I’m delighted at what we have achieved and the number of people we have helped, especially in the face of savage government funding cuts which has taken 53% of central government funding from our budget to date with austerity having no end in sight” he said.

“The challenges just keep on coming – particularly with the rollout of Universal Credit. Salford Citizen’s Advice has seen a 114% increase in the number of people coming forward for help and expect that to continue. When you think that last year they helped nearly 21,000 people you begin to appreciate the sheer scale of the problem.

“The council’s welfare rights and debt advice service helped more than 3,200 people this year to claim an extra £4.8 million in benefits they are entitled to and nearly 4,000 people have used our new BetterOff service which checks benefits and signposts them to job opportunities and childcare provision in the city. We only launched the website and face to face sessions last summer.

“We’ve helped over 25,000 people on low incomes by keeping the council tax reduction scheme at its current level for four years and helped more than 600 householders to reduce their energy costs.

“It’s no wonder that the United Nations, the Joseph Rowntree Foundation and the End Child Poverty campaign say that poverty is getting worse in the UK – the world’s fifth largest economy. It really is a disgrace.”

Even the city’s refuse collectors chipped in and made Christmas much more enjoyable for hundreds of local families than they might have expected. “They asked residents to put out a gift with their bins in December so we could pass it on to local charities and families. Salford people responded magnificently and donated more than 5,000 gifts worth an estimated £25,000 which went to local charities and families,” said Mayor Dennett.

While tackling poverty is a key priority preventing people from falling into difficulties in the first place is vital and City Mayor Paul Dennett is clear how that can be done. “Decent jobs with decent pay and terms and conditions of employment are crucial,” he said. 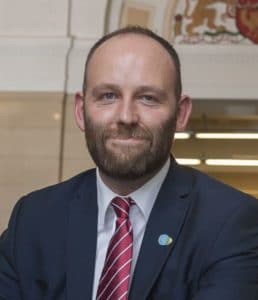 “Salford is the fastest growing economy in Greater Manchester with unprecedented levels of investment and opportunities for local people. TalkTalk recently announced plans to move its headquarters from London to Salford. MediaCityUK is now the biggest digital hub outside London with education facilities on site to train the next generation. These are just some of our many success stories.

“All this, plus more and more businesses and organisations committed to following the council’s lead in paying the ‘real’ Living Wage (as set by the Living Wage Foundation) and improving working conditions creates real opportunities for local people. Salford City council is doing all it can to ensure as many people as possible benefit from what’s happening in our city.

“There’s no quick fix, no magic bullet but Salford’s spirit, strong partnerships, and sheer determination means we can and will do all we can to create a better and fairer Salford for all.”