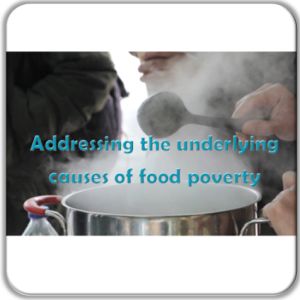 Dr Mags Adams is Senior Research Co-ordinator at UCLAN’s Institute of Citizenship, Society and Change. She chaired one of the sub-groups of the Greater Manchester Food Poverty Alliance, which recommended actions for the Food Poverty Action Plan to address the underlying causes of food poverty. You can read the recommended actions, all of which were included in the Action Plan, and discuss them, here.

Food insecurity in the UK is on the rise as evidenced by the increased use of food banks across the country1 and the increasing number of deaths from malnutrition  (up by more than 30% between 2007 and 20162). At a time when Greater Manchester is performing well economically in terms of job creation and private sector business growth, low pay and low skills mean many people are not benefiting from the region’s success ; median full-time wages are £50 per week lower in Greater Manchester (£494) than they are nationally (£545), and 23% of workers are paid below the voluntary Living Wage3. Universal credit was piloted in Tameside in Greater Manchester before being rolled out to Oldham and further afield. It replaced six means tested benefits with one single payment. It has been highly criticised due to effects on housing rights, evictions and homelessness4. In October 2017 it was reported that 80% of claimants in some housing associations had fallen behind with rent because of delays in receiving their payments5. This new benefit has an inbuilt six-week delay in receiving payments, allegedly to mirror being paid monthly in the workplace (However, it should be noted than many of those earning under £10,000 per annum are actually paid weekly6). In reality delays of ten and twelve weeks are not uncommon before payments are received7.

Many additional factors are also at play in determining why people experience food poverty. For example, food prices fluctuate, the UK is a net importer of food8 and the fall in the pound since the EU referendum has pushed the cost of living upwards9. Furthermore, housing prices are disproportionately higher than in other European countries.

Child poverty in Manchester is one of the highest rates by local authority area; 35.5% of children under 16 live in poverty with 69.4% of them living in workless households10. Many people living in poverty are in part-time and low paid work. 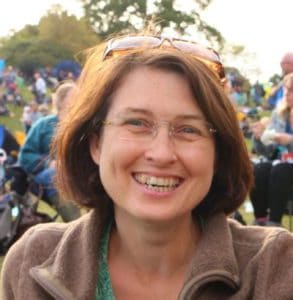 By addressing the underlying causes of food poverty, we can ensure that everyone in Greater Manchester is food secure and has ‘adequate access at all times to sufficient, safe, nutritious food to maintain a healthy and active life’11. Many of the problems associated with food poverty, including hunger and malnutrition, are problems caused by poverty. Addressing this will mean that households have a real living wage for a decent quality of life, that homelessness becomes a thing of the past, that children can focus on their education rather than their hunger, and that everyone has an affordable place to live.

Mags is seeking people to apply for a fully-funded PhD on the topic of “Local food systems and local economic democracy: a framework for delivering food security?” Full details here

2 British Specialist Nutrition Association (2018). Forgotten not Fixed: A Blueprint to Tackle  the Increasing Burden of Malnutrition in England. Available here

4 Greater Manchester Law Centre (2017). “We demand: no evictions as a result of Universal Credit delays” says GMLC, Disabled People Against the Cuts, Acorn tenants’ union and others. Available here

5 Williams, J. (2017, 19 Oct). Families are ‘being made homeless’ by Universal Credit – but its rollout will continue. Available here

6 Institute for Government (2017). The problems with Universal Credit. Available here