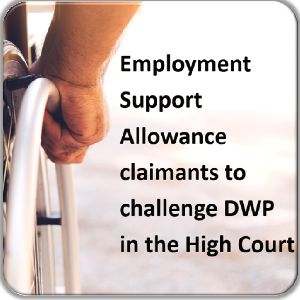 Excerpts from coverage by Osbornes Law and JRF

The High Court is to decide whether it was lawful of the Government not to give nearly 2million people on disability benefits the same £1040 a-year increase that it has given Universal Credit (UC) recipients.

At the beginning of the pandemic the Chancellor announced a £20 per week increase to the standard allowance of Universal Credit, but this vital increase to support was not extended to those on so called ‘legacy benefits’, the majority of whom are disabled, sick or carers.

Two recipients of Employment Support Allowance (ESA) have challenged this difference in treatment by way of an application to the High Court for judicial review. They argue that is it discriminatory and unjustified. The High Court has agreed it is arguably unlawful and will decide the case later this year.

Despite them having an equivalent entitlement to the ‘standard allowance’ of UC, simply because they were in a different part of the system, 1.9 million people on ESA have been without this increase, which many have called a ‘lifeline’, for the last 13 months. Claimants of Income Support and Job Seekers Allowance have also been excluded.

Universal Credit is slowly replacing ‘legacy benefits’ but the process will not be complete until 2024 at the earliest. In the meantime, those on legacy benefits face all the same financial pressures as those on UC, and yet the Government’s Department for Work and Pensions has decided not to treat them in the same way.

William Ford, Osbornes Law solicitor for the Claimants, commented: “This unfairness calls for a properly evidenced justification, particularly as almost 2 million disabled people are disproportionately affected by this decision and the pandemic generally.

“Thus far the Government has failed to provide any objectively verifiable reason for the difference in treatment of people in essentially identical circumstances.”

Helen Barnard, Director of the Joseph Rowntree Foundation, who have been campaigning on behalf of legacy benefit claimants as part of their #KeeptheLifeline campaign said: “Everyone should have access to a strong social security system that protects them from harm when they are struggling to stay afloat.

“Disabled people and carers already face a greater risk of poverty, so there can be no justification for offering them less support than people claiming Universal Credit simply because they are in a different part of the system.

“Discrimination has no place in our social security system and every day we fail to act undermines public trust and intensifies hardship. Ministers must right this injustice by urgently extending the £20 increase to legacy benefits.”

The full press release by Osbornes Law can be read here