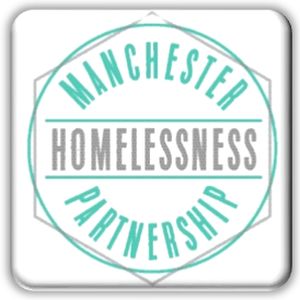 Launch of the Manchester Homelessness Charter

On Monday 9th May, Manchester came together to deliver a new Charter to tackle the crisis of homelessness in the city. Developed by groups working alongside people affected by homelessness, with their voices at its core, the Homelessness Charter is the city’s new approach to tackling homelessness. 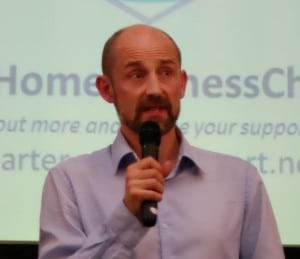 The Charter outlines the principles that establish how people experiencing homelessness should be treated and how the city intends to help them. For example, values it highlights include ‘a safe, secure home’ and ‘equality of access to information and services’. Jez Green of Mustard Tree, who had been seconded to the city to facilitate the creation of the charter, said: “We believe that Manchester should become a city free from homelessness. To do this, we need everyone who lives, works or studies in the city to do their part, and the charter seeks to help this to happen.  It is vital that those affected personally by the issue are given a central role in creating change at every level.”

The Charter particularly calls for action from those who agree to adopt the Charter’s values, to make a pledge to demonstrate their support.  One example came from Allied London, a city center developer, who pledged an annual donation over 5 years of £5,000, with a further £5,000 donated personally by CEO Mike Ingall. 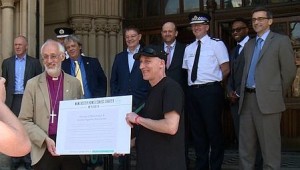 The Charter is handed in on the Town Hall steps

The launch itself was a wonderful event. It began with a formal presentation of the Charter on the steps of Manchester Town Hall. People with first hand experience of homelessness officially presented it to senior leaders from the City including the Bishop of Manchester, the Rt Revd Dr David Walker, Sir Richard Leese, Leader of Manchester City council; the Chief Constable of Greater Manchester Police, Manchester Metropolitan University’s Deputy Vice-Chancellor and representatives from Allied London.

The event then moved inside to the Friends Meeting House on Mount Street. In a packed hall with well over 200 people in attendance, the launch was treated to a performance by Streetwise Opera, who shared a section of their critically acclaimed “The Passion”.  This was followed by reflections given by individuals with experience of homelessness. Very brave, moving and deeply human, the reflections brought whooping cheers and whistles of approval from the audience. 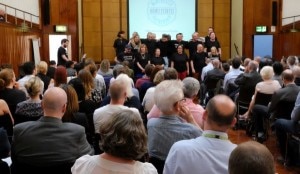 Next to take the stage were senior leaders from the City who came forward to make pledges. Each organization pledged several commitments.  To highlight a few, Manchester City Council pledged to involve individuals with experience of homelessness in the development of new models of delivery. The Bishop of Manchester on behalf of the Diocese pledged to chair the Manchester Homelessness Partnership Board and provide emergency accommodation for rough sleepers. Manchester’s Clinical Commissioning Groups pledged to ensure equal access to services for those experiencing homelessness.

In the second hour of the launch, the audience spread out into the different Action Group sessions, with each one focusing on a new challenge ahead, such as increasing opportunities, promoting alternative giving, improving provision and creating services for homeless people after 5.00pm. It was a big day and a great step forward to tackle homelessness, ever visible, on Manchester’s city streets.