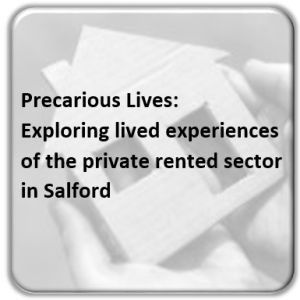 In February 2017, Salford City Partnership launched its new anti-poverty strategy: No One Left Behind: Tackling Poverty in Salford. The University of Salford has been supporting Salford City Council to establish the Salford Anti-Poverty Taskforce. The Taskforce, which is Chaired by Salford City Mayor Paul Dennett, provides research and analysis to underpin Salford’s anti-poverty agenda. On the 31st January – at an event attended by Paul Dennett, Andy Burnham and University of Salford Vice-Chancellor Professor Helen Marshall and Dean of Health & Society Margaret Rowe – we launched the findings of our first Taskforce project, focusing on lived experiences in the private rented sector (PRS) in Salford. This qualitative study focused on the experiences of 29 PRS tenants in Salford, providing unique insights into people’s lives and highlighting three key concerns: affordability, conditions and insecurity.

The fees that people had paid varied considerably, with some referring to paying between £1,200 and £3,000 to move into a new property. One person living in an HMO (which they were desperate to leave) talked about the barrier such fees created in terms of being able to move:

But the fees did not end upon a tenant’s occupation of the property, with people referring to administrative fees and exit fees. Some residents had opted for more insecure rolling one-month tenancies as a means of avoiding the renewal fees.

The cost of rent was also a huge concern for many, representing a significant outgoing and intersected with wider issues around financial stability. Only one interviewee felt as though they were ‘doing well’ financially – the remainder appeared to be ‘just getting by’, with some experiencing greater financial difficulties. For some participants the difficulties they faced related to intersecting issues around benefits and low paid employment. For example, one respondent reflected on their experience of Universal Credit and the deductions that accompanied an increase in their working hours

“I used to get Universal Credit … and they’re supposed to help towards your rent, but because I was working 24 hours-a-week they deduct so much off, so it ended up that I was worse off anyway”

There was a spectrum of poor conditions described by tenants, ranging from issues with damp and mould, and access problems, through to more extreme cases:

“[Our] little girl’s room, the wall fell off…But when the landlord eventually got it fixed, he just told them to slap some plaster in the holes, and now when it’s raining you can just see it getting wet again…The roofer wanted to redo the whole back roof….But he [landlord] said, no, it would cost too much…the bath’s dropping. It looks like it’s going to come through into the kitchen. It’s dropped about that much…So when you go into the kitchen now the kitchen ceiling’s bowed a bit. It looks like the kitchen sink’s going to fall off, because there’s a big hole in the counter top [chuckles]…Our shower is a hosepipe…connected to the boiler”

However, it was evident that responses to repairs were variable with some residents were fearful of making complaints about the poor conditions for fear of eviction:

“It puts us at risk of eviction, and we don’t want to start annoying [our landlord], because obviously, we’d have nowhere to go”

The research reveals the underlying insecurity that people often felt within the private rented sector and the ‘precarity’ that underpins some people’s lives. This relates not only to the often fixed term nature of tenancies, but the ‘power’ that landlords and agents had in terms of selling properties or changing ownership.

While the research primarily highlights negative experiences, there were positive accounts and discussions of ‘exemplary’ landlords, and we are aware that there will be many landlords and agencies that provide high quality properties and service to their tenants. However, even for those participants who were currently satisfied with their accommodation, it was evident that they had often had negative experiences along their journey through the private rented sector.

The full report is available to download and for further information about the Taskforce and our projects, please contact: