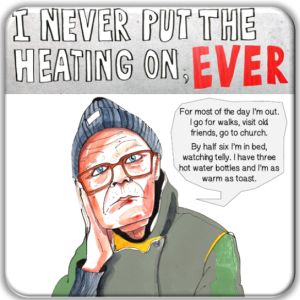 “There are two sides to Manchester,” says sketcher and writer, Len Grant. “On the one hand it’s now considered the trendiest city to live in. On the other, we still have plenty of neighbourhoods with some of the highest levels of disadvantage in the country.”

And while the up-and-coming, hip and trendy side of the city gets lots of media attention; the voices of those at the sharp end of the cost-of-living crisis are rarely heard.

For several months, Grant visited an inner-city foodbank, drawing and listening to the regulars who rely on the bags of weekly groceries as well as to the local volunteers who run the place.

He’s now produced a pop-up exhibition of artworks that is helping to raise much-needed funds for the Coverdale and Newbank Community Grocers in Ardwick. The charity’s chairperson, Elaine Lovesey told Grant: “We have a nurse come in. She has four kids and works full time on the Covid wards. By the third week in the month she’s got no food left and no means to buy any. How bad is that?”

One of Grant’s artworks includes 75-year-old Tommy who told him: “I never put the heating on, ever. By half six I’m in bed, watching telly. I have three hot water bottles and I’m as warm as toast.”

Another regular user of the community grocers – where locals pay £2.50 for £20 worth of fresh and chilled food – described how she had to pawn the family’s only laptop so she could afford enough food that week. “My kids used it for college. So now there’s no laptop. I got £70 at ‘Cash Gen’ for it. I’ll need about £90 to get it out again.”

“I’ve worked with the homeless, those with addiction issues and with undocumented migrants,” Len says. “So I guess I’m used to hearing stories from those on the edges of our society. But I continue to be shocked at the hardship that so many suffer day by day. Just getting through the week is a struggle. In the coming months more and more people will have to rely on places like the Coverdale and Newbank Community Grocers. And, frankly, in 2022, it should not be like this. It’s as if we are going backwards.” 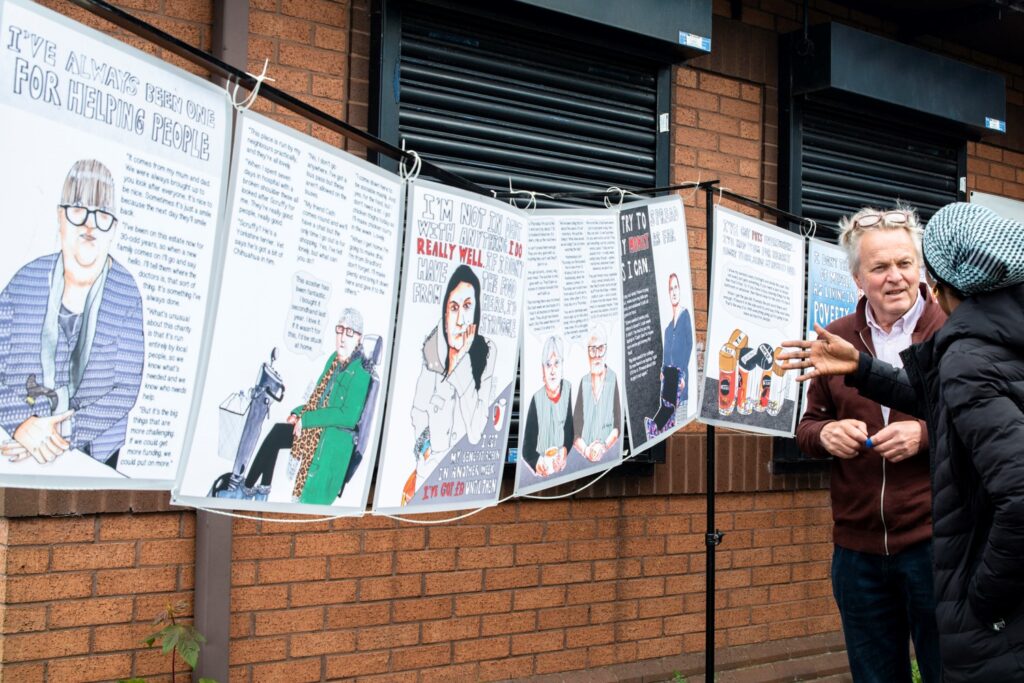 “Those on the lowest incomes are least likely to have their voices heard and, however depressing these stories are, I believe it’s up to the rest of us to at least take time to listen and then help if we can.”

Grant’s pop-up exhibition has toured locations across Manchester and is now available to come to you at your place of work, place of worship, community group or event. Just get in touch with Len.