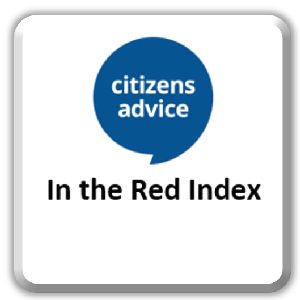 More and more people are coming to Citizens Advice in financial crisis than at any point since the start of the pandemic.

One of the most powerful indicators comes from their debt advice.  Citizens Advice do detailed budgeting exercises with tens of thousands of people every year, trying to help them come up with sustainable ways to get out of problem debt. But for almost half of the people they help, because of the cost-of-living crisis, their advisers now just can’t make the sums add up.

Citizens Advice are now publishing a new regular index for this data called ‘In the Red Index’ because it shows the proportion of those who come to them in debt who can’t make ends meet. They’re literally in the red. Since the cost-of-living crisis began, the proportion of people in a negative budget has only been going in one direction: up.

They are seeing the highest proportion of people in negative budgets since their records began. In early 2019, the number of people they were supporting in a negative budget was 36%. In the first quarter of this year — before the energy price cap had increased – the figure had reached 46%,

The trend for every demographic group is upwards; the increase in essential costs is catching everyone to some degree. But the crisis is discriminating — it’s making things tougher for groups who were already struggling.

It’s security of income and security of tenure that matters, in addition to actual income level. If you can’t predict when you’ll be paid  – as for example self-employed people often can’t  – you could be more likely to end up in a negative budget.

And because Universal Credit calculations about entitlement are complex, and because it can vary month by month, it’s hard to work out what your payment is going to be and that variability often makes it harder for people to budget effectively.