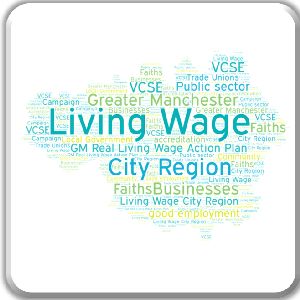 Living Wage Week, November 15th – 21st, saw events every day of the week in Greater Manchester to celebrate the fight for a decent wage for all. 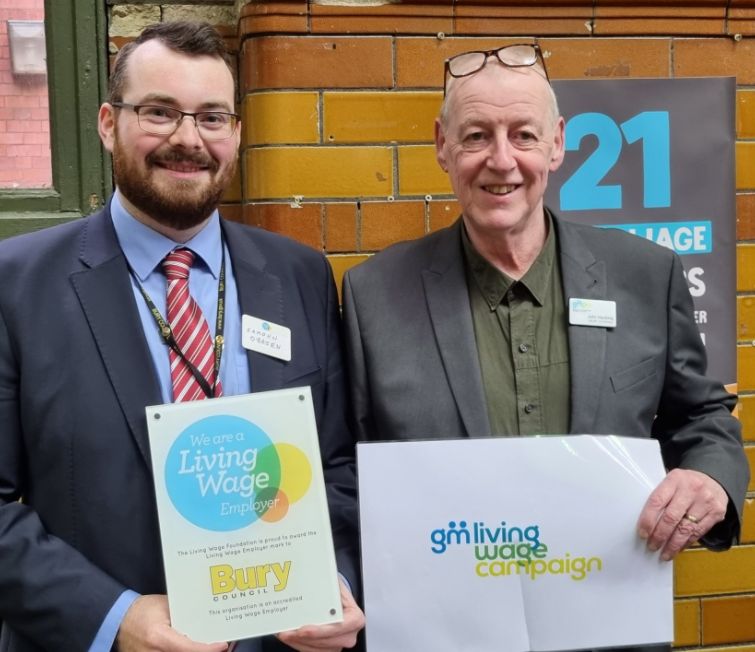 On Monday at the People’s History Museum we learned the new rate for the Real Living Wage (RLW) of £9.90 per hour (outside London). This represents a pay rise for thousands of lower-paid workers in the city region. The event also heard Greater Manchester Mayor Andy Burnham set out the plan to make Greater Manchester the first RLW City Region in the UK (more on that below), with the objective of every worker in Greater Manchester receiving at least the RLW by 2030. There were some great contributions from a wide range of speakers and in particular, a passionate plea to end low pay in the care sector from Danni Dolan, a care worker and Unison member.

At the event Eamonn O’Brien, the Leader of Bury Council, was presented with a plaque to celebrate the local authority becoming a RLW employer.  Bury is the fourth Council in Greater Manchester to take this important step, joining Manchester, Salford and Oldham.

On Tuesday, Wednesday and Friday members of GMPA’s team attended events organised by Salford CVS, pro.manchester and The Mustard Tree respectively. “There’s an intrinsic connection between the happiness of employees and the productivity of a company” said Greater Manchester Local Enterprise Partnership Chair Lou Cordwell at the pro.manchester event, “As employers, we have a massive responsibility to do the right thing.” The room was full of business leaders, some who already pay the RLW and some who planned to, and were there to find out more.

On Thursday November 18th Greater Manchester Poverty Action hosted a policy roundtable event to mark Living Wage Week. The event was attended by a range of policy makers and opinion formers including businesses, VCSE representatives, academia, trade unions and the Living Wage Foundation. The discussion focused on how to build on the RLW work being done in Greater Manchester to tackle in-work poverty, with questions such as: how ambitious can we be? what sectors should we be focussing on? and what else needs to happen in policy terms?

One of the most important elements of the Week was the launch of the Greater Manchester Living Wage City Region Action Plan, which we have been actively involved in shaping over the last year. Greater Manchester is the first city-region officially recognised by the Living Wage Foundation for its ambitious plans to increase take up of the RLW. The aim is to raise the number of accredited RLW Employers from 384 to 650 in three years, with all businesses paying the RLW by 2030.

This is a big step towards GMPA’s objective to boost household incomes and financial resilience across Greater Manchester.