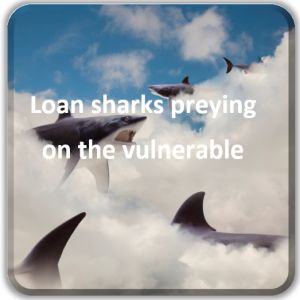 Loan sharks preying on the vulnerable as cost-of-living soars

Families struggling to cope with the rising cost-of-living are being targeted by predatory loan sharks.

With price increases on everything from fuel to food making it increasingly tough for households to make ends meet, unlicensed lenders are stepping in, offering loans to the desperate at astronomical interest rates.

A report published by the Centre for Social Justice estimated 1.08 million people could be borrowing from an illegal money lender – more commonly known as a loan shark. This figure has more than trebled since 2010. The study revealed that borrowers are often among the poorest in society:

Loan sharks are among the most ruthless, cunning and manipulative criminals operating in our society today. They exploit people’s vulnerabilities and force them into repaying loans with usurious interest rates. Victims are trapped in an endless cycle of debt and poverty, which can lead to family hardship, homelessness and severe mental health issues.

This crime is so widespread and hidden that people affected by it are too scared or ashamed to talk about their experiences. Many feel they have no recourse because they are afraid of repercussions or simply don’t know where to go for help.

The real danger of loan sharks is not just the large sums of money they lend out and extortionate rates of interest they charge. It’s the psychological toll it takes on victims and their families, leaving them feeling trapped and helpless.

Loan sharks are often seen as a last resort for people who have no other option for obtaining credit, including those with poor credit histories who are rejected by mainstream lenders. With just one unexpected bill, people can quickly find themselves in the grip of an illegal lender.

The loan shark might be a friend or acquaintance, or they might simply be someone known in the area for lending money. They will often deal in cash, rarely provide any paperwork, and will demand very high interest rates or they may not even be clear about what the borrower has to pay back.  The most common form of coercion is the threat of violence, but there are other forms too. Borrowers might be asked to give up valuable items or get involved in criminal activity as an alternative repayment on their loan.

The England Illegal Money Lending Team (IMLT) is a dedicated and highly specialist team of law enforcement officers working across England to combat illegal lending and associated crime.  The IMLT supports local authorities and partner agencies in identifying, investigating and prosecuting perpetrators of illegal lending, as well as offering specialist advice and support to victims and communities affected by this crime.

Loan sharks pose a persistent and dangerous threat to our communities, which is why Greater Manchester Poverty Action is supporting the work of the IMLT to raise awareness and inform the public of the warning signs of illegal lending activity. Loan sharks will never be eradicated completely, but we can make it harder for them to flourish.

Together we can fight against loan sharks by learning to recognise their tactics and knowing when someone is struggling to escape the clutches of an illegal lender. Ask questions, offer support, and encourage people to report their problems to the Illegal Money Lending Team.

The Stop Loan Sharks Helpline is available 24/7 on 0300 555 2222 and provides confidential advice, support and information to anyone affected by illegal lending. You can also email the team or use the live chat service on their website. This service is available between 9am and 5pm, Monday to Friday.

Since 2004, the IMLT has supported over 30,000 people to escape the clutches of loan sharks and written off illegal debt worth nearly £90 million.

The team provide free awareness training for frontline workers to ensure they know the signs to look out for when dealing with vulnerable individuals who may be in the grip of a loan sharks. Please email for more information.