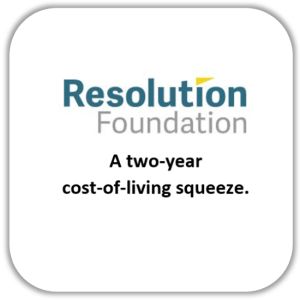 Britain is in the midst of a living standards disaster. Inflation reached its highest level in 41 years in 2022 – and remains at double-digit levels. Pay packets are shrinking rapidly in real terms. The Government has stepped in with a package of cost of living support that is set to cost £58 billion over the course of this year (2022-23). But even that isn’t enough to prevent typical household incomes from falling by 3%.

To deepen our understanding of where this crisis leaves Britain, our Living Standards Outlook 2023 uses a new YouGov survey of 10,000 adults to explore how households are coping. In addition, new RF modelling helps us to understand what the latest economic developments and planned government policy mean for household incomes and poverty this year and beyond.

With the crisis currently being driven by the higher cost of essentials like food and energy, lower-income families are finding it hardest to cope. Among people in the poorest fifth of working families, 32%  say they are not confident about their finances as a whole over the next three months (compared to 19% overall), while 34% say their health has been affected by the rising cost of living (compared to 21% overall). We will ask these questions again later this year, to see if people are faring any better or worse.

What about the wider outlook for living standards? We found that typical household disposable incomes for working-age families are on track to fall by 3%  this financial year, and by 4%  next year, with the two-year cost-of-living squeeze set to leave families £2,100 worse off. The scale of this fall is considerably tighter than the post-financial-crisis squeeze of 5%  between 2009-10 and 2011-12.

This outlook is bleak, but government support has responded well to the nature of the cost-of-living crisis, by rightly prioritising support at those most in need. Because of this, and with the exception of the very richest households who have seen their savings income soar, the scale of income falls will be smaller for poorer families than richer ones.

But there is still more the Government can do more to protect households from the brunt of the crisis. The Government should look at the Cold Weather Payments, and consider whether the trigger temperature should be raised, so that they are paid more often, and eligibility extended to more working-age households receiving benefits. In the medium-run, better insulation is key to reducing household energy bills and easing the transition to net zero, but this requires a greater focus on UK’s homes’ inefficient walls.

Families with three or more children are heavily affected by the two-child limit, the benefit cap (the inflation increase this year is its first nominal increase since 2013), and the post-pandemic freeze in LHA rates. All of these policies should be reviewed. And linking Cost of Living Payments to receipt of security benefits or the state pension makes it more important than ever that those entitled to those benefits claim them, and the Government (and other organisations) should be encouraging take-up of means-tested and disability benefits. The UK Government should also mandate a minimum provision of crisis support by local authorities, if necessary with ring-fenced funding.

The outlook for living standards is bleak, but uncertain. It could improve, or worsen. The government should be ready to respond to either of these outcomes.