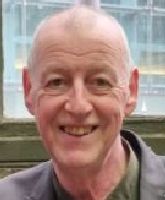 John has a lifelong commitment to raising the aspirations and living standards of the marginalised and those on low incomes in our communities and has a deep commitment to collaborative and co-operative working.