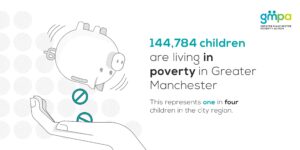 Around 145,000 children are living in relative poverty (before housing costs) in Greater Manchester. The child poverty rate in the city region is higher than the England and UK average.

Following the publication of the Monitor in May 2022, the End Child Poverty Coalition published updated local authority level child poverty rates measured after housing costs (i.e. figures that show poverty rates once housing costs have been met). We added these figures to the bottom of this page in July 2022. When measuring poverty in this way, child poverty figures in each of Greater Manchester’s boroughs are even higher.

This chart shows the proportion of children living in relative and absolute poverty in each of Greater Manchester’s ten boroughs in 2021 (the year for which data is most recently available).

The chart also allows you to look at child poverty rates overtime. Whilst there had typically been an upward trend in child poverty in most Greater Manchester boroughs in the years leading up to the pandemic, child poverty fell between 2020 and 2021. This has been largely driven by the £20 per week increase in Universal Credit announced in March 2020.

The map below shows the percentage of children in absolute or relative poverty before housing costs by wards in Greater Manchester. The highest rates of both relative and absolute poverty can be found in close proximity to the centres of some of the city region’s towns (Bolton, Rochdale and Oldham) and in parts of north and south Manchester.

Coldhurst in Oldham is the ward with the highest relative child poverty rate (64%), with Hale Central in Trafford and Deansgate in Manchester sharing the lowest rate (3.5%).

This map shows estimates of the percentage of students eligible for Free School Meal (FSM) by ward across eight out of ten Greater Manchester boroughs (comparable data for Bolton and Wigan wasn’t available at the time of publication). FSM eligibility is often used as a proxy for measuring child poverty and gives an insight into the number of families eligible for support in an area.

The darker the area on the map the higher the proportion of children eligible for FSM. Hovering over an area with your cursor allows you to see the FSM eligibility rate for that ward.

These estimates were made by GMPA using ONS population estimates and data provided by local authorities showing the number of pupils eligible for FSM in each ward. 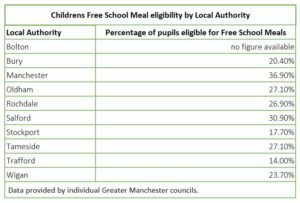 This table shows the proportion of pupils in each Greater Manchester borough eligible for Free School Meals. Free School Meal eligibility is often used to understand the number of school pupils living in low income households in a locality, and can be used to complement the child poverty data presented above.

Manchester has the highest proportion of pupils eligible for Free School Meals (36.9%) and Trafford the lowest (14%). Please note that we were unable to obtain figures from Bolton.

You can find out more about Free School Meal eligibility here. 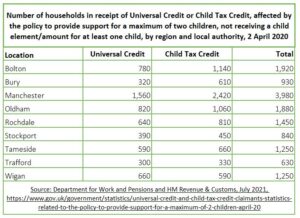 Under the two child limit policy, parents are not entitled to any extra support through universal credit or child tax credit to help with raising a third or subsequent child born after 6 April 2017. According to Child Poverty Action Group, this means they lose out on up to £2,935 a year, and puts families’ budgets under enormous strain. You can read more about the two child limit policy and the impact of it here.

This table shows the total number of households affected by the policy in each of Greater Manchester’s ten boroughs – this amounts to 14,130 across the whole of the city region.

The following table is based on analysis of government statistics undertaken by the Centre for Research in Social Policy at Loughborough University on behalf of the End Child Poverty Coalition. The analysis estimates child poverty rates for local authorities and parliamentary constituencies in the UK for each year from 2014/15 to 2020/21.