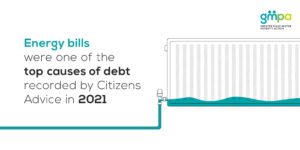 Debt plays a crucial role in determining the nature of poverty and the experience of people on low incomes. Debt can compound poverty and eat into already limited resources.

On this page you can find out more about debt levels in Greater Manchester, using data provided by the city region’s Citizens Advice branches. Debt is an issue across the city region, with many people who are in-work, including people in fulltime employment, experiencing debt problems. Energy bills are a common cause of debt among Citizens Advice customers.

Please note we are awaiting some additional commentary from Citizens Advice to aid interpretation of the data illustrated on this page.

Since 2017, the average level of debt among those seeking advice has varied across the boroughs and the difference in average debt levels between Manchester and the nine other boroughs was less pronounced in the years prior to 2021.

In work poverty is a major problem in the UK, including in Greater Manchester. Avoiding debt is difficult for many people in low paid work.

This chart shows the work status of people in employment who have sought debt advice from Greater Manchester branches of Citizens’ Advice. Across all of Greater Manchester’s borough a higher proportion of people working full or near to full-time hours (i.e. 30 hours or more) have sought debt advice compared to those working less than 16 hours, those working between 16 and 29 hours and those classed as self-employed.

This chart shows the proportion of people seeking debt advice from Greater Manchester branches of Citizens’ Advice who have reported previously taken out payday loans. Payday loans are relatively small loans that need to be repaid over a short time period. They often charge high interest rates and high penalties are applied if repayment conditions aren’t met. For these reasons, payday loans can compound debt and result in significant financial hardship.

Whilst a majority of people seeking debt advice from Citizens’ Advice in Greater Manchester are categorised as ‘not disabled’, a significant proportion are experiencing long-term health problems (38.1% in 2021).

This chart shows the proportion of people who have sought debt advice from Citizens’ Advice branches in Greater Manchester who have been subject to a debt enforcement.

This table shows causes of debt recorded by Citizens Advice branches in Greater Manchester in 2021 across the city region’s ten boroughs. Causes of debt vary, with council tax arrears and fuel debts being a common problem. We are awaiting further analysis from Citizens Advice so that we can provide greater insight into these figures.