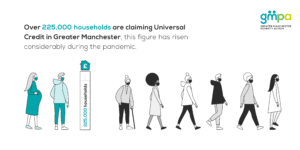 Added August 2022: Percentage of people claiming Universal Credit by MSOA, percentage of residents in receipt of Council Tax Support by ward and non-take up of Pension Credit by ward.

Social security data shows us how many people in an area are in receipt of certain benefits. During the pandemic, more and more people sought support through the social security system in the UK, and this has been true here in Greater Manchester. This is best illustrated through the Universal Credit claimant data detailed on this page, with the number of claimants increasing in all ten boroughs at the onset of the pandemic.

This page provides data at a Greater Manchester level and at a borough level. Whilst most benefits are administered by central government, councils are responsible for Council Tax Support and not-for-profit organisations are stepping in to support people. Therefore, this page details Council Tax Support data and data on grants provision from the charity Turn2Us.

Universal Credit is the main working age benefit for people out-of-work and people in low paid employment. A high proportion of claimants in an area suggests a high number of low income, working-age households.

The orange and red areas are those with higher Universal Credit claimant rates. Use your cursor to identify the claimant rate for the area/s you are interested in.

The estimates are GMPA calculations based on DWP claimant data and ONS population estimates.

This map estimates the proportion of residents in receipt of Council Tax Support by ward in eight out of ten Greater Manchester boroughs (comparable data for Salford and Stockport wasn’t available at the time of publication). This is based on the number of claimants in each borough in December 2021.

Council Tax Support provides help for people on low incomes with their Council Tax bill. The exact nature of support differs from one local authority area to the next.

The data presented on the map uses Council Tax Support numbers by ward provided by each local authority and ONS population estimates to estimate the proportion of recipients in an area. Use your cursor to identify the claimant rate for the area/s you are interested in.

This map shows the estimated number of people eligible for, but not claiming Pension Credit in each ward in Greater Manchester. It also shows the total annual value of non-take up by ward (i.e. the total monetary value of Pension Credit not being claimed by eligible non-claimants in each area).

Use your cursor to identify the claimant rate for the area/s you are interested in. The data was provided by the Greater Manchester Combined Authority.

Out of work claimants

This chart shows the proportion of people claiming out of work benefits overtime and illustrates how claimants rates in Greater Manchester are consistently higher than the national average. The proportion of out of work claimants rose in both England and Greater Manchester at the onset of the pandemic, and has fallen since (this is true for all people and when broken down by gender).

Looking at individual boroughs, Oldham has the highest out of work claimant rate at 8.6%, following by Rochdale at 8.1%. Most boroughs in Greater Manchester tend to have a higher out of work claimant rate than the national average. However, Trafford has had a consistently lower rate and the rates in Stockport and Wigan are close to the national average.

Please note that variance between Local Authority areas cannot be interpreted from the counts displayed here without first accounting for the population within each area.

The charity Turn2Us provide grants to people facing financial hardship. This chart shows grants issued by Turn2Us to recipients living in Greater Manchester since January 2020. To find out more about the support they provide click here. 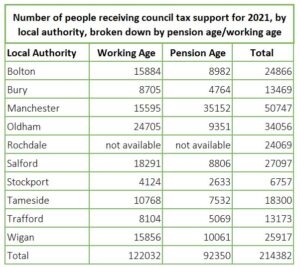 Please note that variance between Local Authority areas cannot be interpreted from the counts displayed here without first accounting for the population within each area.

This chart shows the number of Housing Benefit (HB) claimants, and the number of households claiming the Housing Element of Universal Credit (UC), by local authority in June 2021. UC has been introduced to replace other welfare benefits, including HB- new claimants for welfare benefits now instead receive the housing element of UC to cover their rent. It is therefore helpful to look at the figures for the two different benefits together to understand the total number of households in receipt of support.