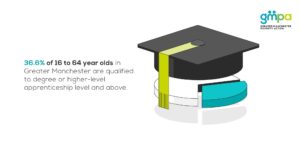 Educational attainment is a major factor in determining a person’s risk of poverty. In Greater Manchester, there is variation across the city region at each stage of educational development.

This chart shows the average attainment score of students at the end of Key Stage 4 and how this has changed over time. Several major reforms to Key Stage 4 testing have been introduced and the data presented here should be interpreted in the context of these changes: