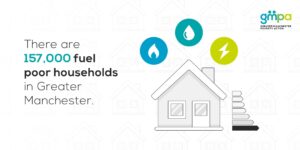 Many households experiencing poverty faced particular challenges in respect of fuel and food poverty. Fuel poverty and food insecurity data are detailed at a local level on this page.

This map displays the estimated percentage of households at increased risk of experiencing food insecurity based on the demographic characteristics of people living in households including low income, lone parent households, low income households with dependent children, people aged 16-64 years who live alone on a low income and those aged over 65 years who live alone. The distribution of those areas most at risk is not even across Greater Manchester with the greatest percentages of areas most at risk concentrated in Oldham, Rochdale, Manchester and Bolton.

This was based on work by Dianna Smith, Claire Thompson, Kirk Harland, Storm Parker, and Nicola Shelton (2018).  Further information 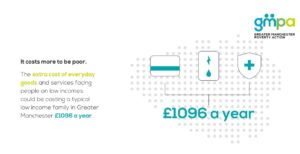 This table is taken from GMPA’s poverty premium research, published in November 2018. It replicates the methodology developed by Save the Children and used by researchers and campaigners on several occasions to help illustrate the potential extra costs for everyday goods and services facing low income households in the UK. This version of the illustration found that the extra costs facing a typical low-income family in Greater Manchester could amount to £1096.67 more than households not experiencing poverty. Car insurance and household white goods have the highest poverty premium.