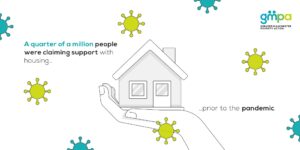 Around a quarter of a million people in Greater Manchester were claiming either Housing Benefit or the Housing Element of Universal Credit prior to the pandemic.  The cost of housing can play a big part in whether a household is experiencing poverty or not. Once housing costs are taken into account, rates of poverty tend to be significantly higher as the data on child poverty  detailed in the Monitor shows.

This chart shows the number of Housing Benefit (HB) claimants, and the number of households claiming the Housing Element of Universal Credit (UC), by local authority in February 2020. UC has been introduced to replace other welfare benefits, including HB- new claimants for welfare benefits now instead receive the housing element of UC to cover their rent. ‘Managed migration’ of existing households from their welfare benefits (including HB) to Universal Credit began in 2019, and should be complete by 2024. In total there were around 250,000 claimants of HB or the Housing Element of UC in February 2018. Manchester had the highest numbers of both claimants, with significantly higher levels of people claiming HB (40,000) and the UC Housing Element (23,000); the number of households claiming UC Housing Element in Manchester was more than double that of the next highest local authority (Oldham, 10,000 claimants). Bury had the lowest number of claimants of both types of benefit.