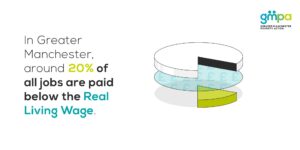 Work is often seen as the best route out of poverty. However, around two thirds of working age adults and children experiencing poverty in the UK live in households where at least one person is in work. The rise of in-work poverty in the UK has been a growing trend over the last decade and suggests that employment alone is often not an effective means of escaping poverty. Addressing low pay and supporting in-work progression is central to tackling in-work poverty. That’s why GMPA hosts the Greater Manchester Living Wage Campaign. The data on this page shows some of the differences in respect of pay and wage growth in Greater Manchester over recent years.

Of course, the risk of poverty remains greater among those living in workless households. This page also details unemployment rates for males and females over time in each of Greater Manchester’s boroughs. 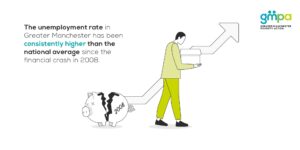