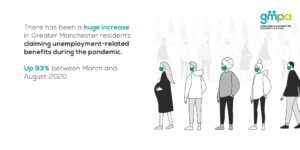 Social security data shows us how many people in an area are in receipt of out-of-work benefits or in receipt of in-work support and the type of support they are receiving.  Some of this data for each borough in Greater Manchester, and at a more local level, is detailed on this page.

During the pandemic, more and more people have sought support through the social security system in the UK, and this has been true here in Greater Manchester. This is best illustrated through the Universal Credit claimant data detailed on this page.

Out of work claimants

This chart displays the proportion of working age residents in Greater Manchester who are claiming out of work benefits. Eight of the ten Local Authority areas within Greater Manchester have rates above the England average with clear variation evident across the conurbation; the highest proportion of claimants are found in Oldham (9.5%) and the lowest in Trafford (5.4%). The percentage difference from the national average is provided in brackets above each Local Authority bar. Over time, a broadly similar pattern is observed across all localities that is closely in-keeping with the national picture. 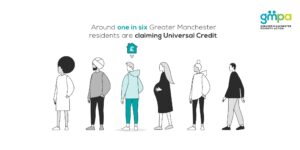 This chart displays how the number of Universal Credit claimants across Greater Manchester has changed over time on a monthly basis from April 2018. Over this period, the number of claimants has increased steadily across all Local Authorities in a broadly similar pattern. In March 2020, the number of Universal Credit claimants rose sharply across all areas and continued to increase over the following months. Variance between Local Authority areas cannot be interpreted from the counts displayed here without first accounting for the population within each area.

Across Greater Manchester the number of claimants for Universal Credit appear concentrated in MSOAs in Manchester city centre and specific areas of Salford, Oldham, and Rochdale. Comparatively, Stockport, Wigan, and Trafford have fewer specific concentrations of claimants, although, data at a detailed geographical level reveals that within each Local Authority area there is clear variance in the number of claimants. As the map is displaying claimant numbers, some of the patterning seen here is reflective of population density across the conurbation with large concentrations of claimants mirroring densely populated urban areas.

This chart shows the number of Housing Benefit (HB) claimants, and the number of households claiming the Housing Element of Universal Credit (UC), by local authority in February 2020. UC has been introduced to replace other welfare benefits, including HB- new claimants for welfare benefits now instead receive the housing element of UC to cover their rent. ‘Managed migration’ of existing households from their welfare benefits (including HB) to Universal Credit began in 2019 and should be complete by 2024. In total there were around 250,000 claimants of HB or the Housing Element of UC in February 2018. Manchester had the highest numbers of both claimants, with significantly higher levels of people claiming HB (40,000) and the UC Housing Element (23,000); the number of households claiming UC Housing Element in Manchester was more than double that of the next highest local authority (Oldham, 10,000 claimants). Bury had the lowest number of claimants of both types of benefit.