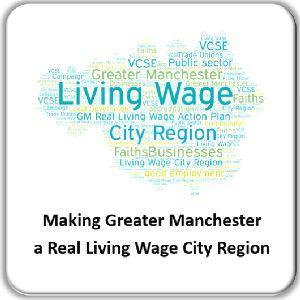 May 12th was a very significant date for the campaign to make Greater Manchester a Real Living Wage City Region as it saw the first meeting of the City Region Living Wage Action Group chaired by the newly elected Mayor of GM, Andy Burnham.

Greater Manchester Living Wage Campaign (GMLWC) has been working towards the goal of making GM a Real Living Wage City Region for a number of years and the announcement in November 2020 by the  Mayor that it was his intention to make this vision a reality, was a massive step forward for our campaign to see a real improvement in the lives of thousands of low paid workers in our area.

Since the announcement I have (as reported in previous newsletters) been working with partners and stakeholders across GM to create the Living Wage Action Plan which was unveiled on May 12th. The Living Wage Action Plan Group will now work to outline a clear path towards the goal of all employers in the city-region paying the living wage and offering living hours by 2030, as recommended by the Independent Inequalities Commission in its report published earlier this year.

I have been, and will continue, to work on the Plan to ensure that there are ambitious targets and that there is the widest and most diverse possible involvement from all sectors and communities across GM.

The Action Plan Group will be chaired by Lou Cordwell, Chair of the Greater Manchester Local Enterprise Partnership and is made up of businesses, unions, local authorities, civil society, faith groups, social enterprises and voluntary organisations.  The Plan will focus on key sectors of the GM economy: ‘anchor institutions’, including large public sector organisations; local authorities; health and social care; hospitality and leisure; large employers; small and medium enterprises; and the voluntary, community and social enterprise sector.

GMLWC along with GM Citizens will lead on the campaigns sub-group  focussing on using our local networks of Real Living Wage activists and advocates to target employers across GM working with local and national campaigns.

As part of the work to involve a wide and diverse group of people and organisations in the Campaign Subgroup, we will be holding a meeting of the GMLWC group in June. If you are on the database you will receive more information in the next couple of weeks. If you aren’t but want to be then please send your name, organisation (if applicable) and email address to me.