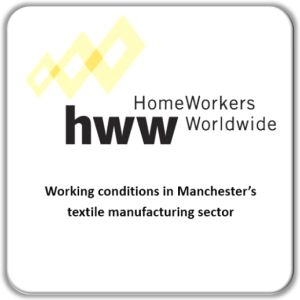 In 2017, the international women workers’ organisation, Homeworkers’ Worldwide (HWW), more used to mapping the garment industry in countries as far away as India, Chile and China, completed a scoping study on working conditions within the textile and garment manufacturing sector within Greater Manchester (GM). Our report is available on the Homeworkers Worldwide website here.

Our outreach project contacted over sixty local organisations, collating anecdotal information about workers in the sector, which eventually led to interviews with two retailers, six manufacturers and five workers. We also built up a database of information about over a hundred companies within GM.

Initial interviews found evidence that confirmed that the low wage rates (around £4/hour) and double accounting systems found by Professor Hammer in Leicester in 2015 were also present in some factories in Greater Manchester:

Small manufacturers also highlighted the challenges they faced, due to large retailers’ unfair purchasing practices, which included driving down prices to levels where it was impossible for them to pay their workers properly and leaving invoices unpaid for several months at a time.

‘In Bangladesh or China you have to pay 30% in advance, and then pay everything to release the goods … whereas here the law is so weak, they all expect 60 or 90 day terms ..’

‘the retailers are very dishonest ..  they’re all billionaires, yet they won’t pay invoices for months ..’

‘E-tailer X .. is really hard to work with, constantly driving down the prices ..’

This was intended to be an initial study, that we hoped would lead to a larger action research project. Unfortunately  we were not able to extend the scoping study so it is not possible to say how prevalent these issues are within the UK industry.

The report highlights the importance of further research to enable workers voices to be heard in the debate to improve working conditions within UK manufacturing, and concludes with some provisional policy recommendations.

These include the importance of accessible employment rights advice backed up by effective enforcement services that operate independently of immigration controls, to support workers who take action to claim those rights. Large retailers particularly those who value the flexibility and fast turnaround that local manufacturers can provide, need to recognise their responsibilities, and support their much smaller UK based suppliers to provide decent working conditions for workers making and packing their clothes now, and also to invest in a sustainable future for the UK industry.

Small suppliers need retailers to help them manage the risks involved in the fashion business, so they do not pass these onto their workers. Employers highlighted issues such as prompt payment terms, as well as larger or more consistent orders, which would reduce their overheads and enable them to improve working conditions within their factories. National government should also consider introducing joint liability for the most serious labour rights abuses, to hold the often much larger retailers accountable for working conditions in their supply chains 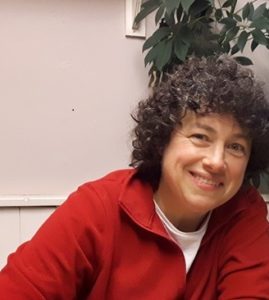 HWW would be very keen to collaborate with others to find ways to extend this work, as was originally planned when we started on the work in 2017. Please contact Lucy Brill if you have any proposals to take this forward.