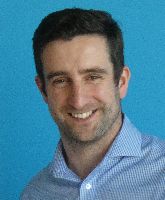 In his current role as CEO, Graham leads on GMPA’s policy, research and advocacy work and represents the organisation at a strategic level across the city region.

Outside of his GMPA role, Graham is a councillor in Trafford.