At GMPA we believe that the socio-economic duty will provide a powerful foundation for a fairer society. As there is an absence of action at a national government level, we are working with local and combined authorities to increase awareness and voluntary adoption of the duty as a means of creating better outcomes for those with lived experiences of poverty.

We believe that public bodies in Greater Manchester can learn from other areas about how they can apply the duty. We are delighted that the duty is being taken forward a number of councils and was recommended for adoption by the Combined Authority in the Greater Manchester Independent Inequalities report.

At GMPA we have produced several outputs to guide local authorities, and other public bodies with adopting the socio-economic duty.

This briefing sets out the scale of voluntary adoption of the socio-economic duty by local authorities in England based on FOI requested conducted by GMPA.

This guide is intended for local and combined authority officers, local councillors and metro mayors in England interested in tackling socio-economic disadvantage.

The guide is also of use to local authorities (and other public bodies) in other parts of England. It was developed by GMPA in partnership with Just Fair, Equality Trust, Amnesty, Compassion in Politics, Equally Ours, Runnymede, Thrive Teeside and Shelter.

It was developed by GMPA in partnership with Just Fair, Equality Trust, Amnesty, Compassion in Politics, Equally Ours, Runnymede, Thrive Teeside and Shelter.

This briefing supports local authorities when considering poverty and socio-economic status in assessment of community responses to the pandemic. 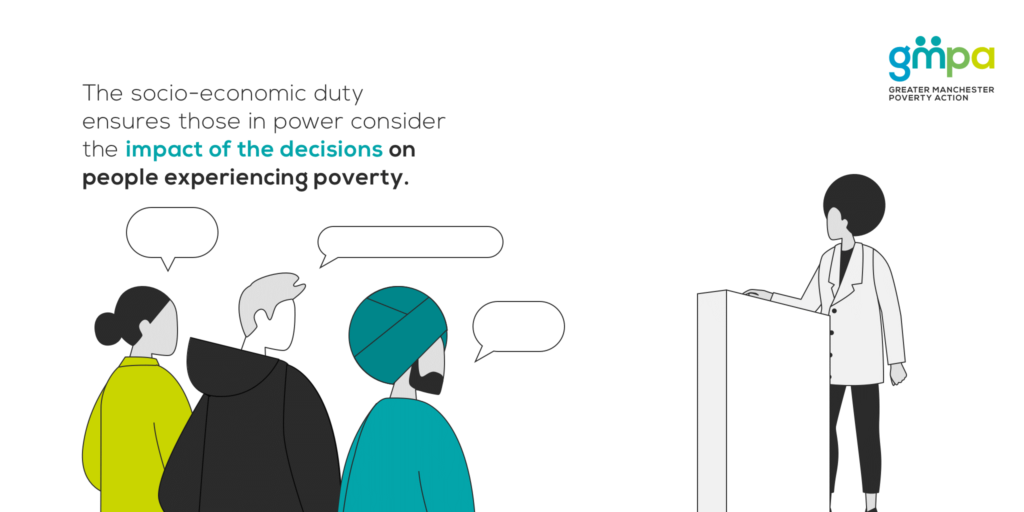