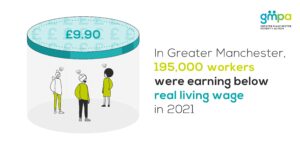 Work is often seen as the best route out of poverty. However, around two thirds of working age adults and children experiencing poverty in the UK live in households where at least one person is in work. The rise of in-work poverty in the UK has been a growing trend and suggests that employment alone is often not an effective means of escaping poverty. Addressing low pay and supporting in-work progression is central to tackling in-work poverty. That’s why GMPA runs the Greater Manchester Living Wage Campaign. This page provides pay data for each of the city region’s ten boroughs.

Of course, the risk of poverty remains greater among those living in workless households. This page also details unemployment rates in each of Greater Manchester’s ten boroughs over time. 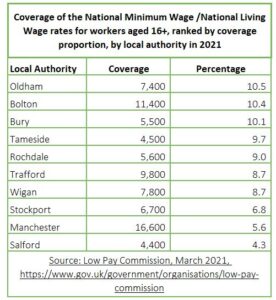 This chart shows the unemployment rate in those aged 16-64 between 2005 and 2021, by gender and by local authority and by Greater Manchester as a whole compared to England.

Looking at individual boroughs, overtime unemployment rates have fluctuated more than across England as a whole. In 2021, four boroughs (Bolton, Salford, Tameside and Wigan) had unemployment rates below the England rate. All other boroughs had higher rates, with Manchester being home to the highest rate of unemployment (8.7%). 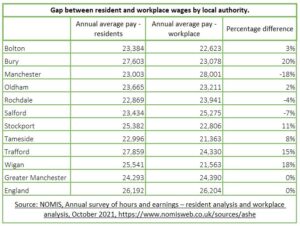 This chart shows changes in pay since 2007. In Greater Manchester, as in England, pay for fulltime workers grew overtime up until 2020, but has fallen recently.

Pay for part time workers has continued to rise across England as a whole, but has fallen recently in Greater Manchester.

The chart also shows annual gross pay across each of Greater Manchester’s ten boroughs broken down by working hours and gender. 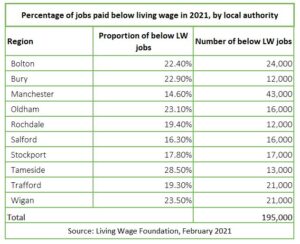 This table shows the proportion of jobs paid less than the Real Living Wage across Greater Manchester’s ten boroughs. The Real Living Wage is an independently calculated, voluntary hourly rate designed to meet actual living costs which is paid by over 10,000 UK employers. It is different from the government’s National Living Wage, which is a statutory minimum that applies to all UK employees aged 23 and over. The rate currently stands at £9.90 per hour.  Tameside is home to the highest proportion of jobs paying less than the real living wage (28.5%) and Manchester the lowest (14.6%).

Across the whole of Greater Manchester there are 195,000 jobs paying less than the Real Living Wage. 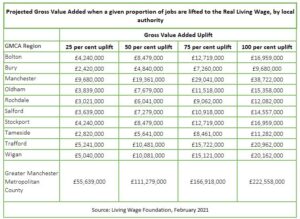 The economic benefits of paying the Real Living Wage

This table shows the economic benefit (as measured by ‘gross value added’ of increasing the number of jobs paying the Real Living Wage.

Increased payment of the Real Living Wage has a ‘multiplier’ effect when it comes to economic growth, resulting in increased productivity, greater localised spending and increased tax revenues.

For more information, see this report: ‘The Living Wage Dividend: Maximising the local economic benefits of paying a living wage’.