While local poverty data is crucial to understanding the extent and impact of poverty in Greater Manchester, national poverty data can show trends in poverty over time and suggest how diverse groups of people are affected differently by poverty. The graphs on this page show poverty trends for the whole of the UK. These trends (such as the extent of poverty among children and pensioners) are likely to be replicated across Greater Manchester.

Most of the data used to understand poverty in the UK comes from the Households Below Average Income Survey (HBAI), which is collected annually. As a result of Covid, significant changes were made to the way the data for the most recent survey (2020/21) was collected. Far less households were able to be surveyed (just over 10,000 compared to between 19,000 and 20,000 in previous years) and interviews, which were previously carried out in-person, had to be conducted over the phone. These changes mean that the 2020/21 HBAI data cannot be broken down to show trends in poverty as they affect small groups in the population as the smaller sample size reduces the ability of the sample to accurately reflect wider society. As a result, we have relied on the 2019/20 HBAI Survey results to create more detailed graphs, available here, and have published limited graphs using the most up to date data on this page. 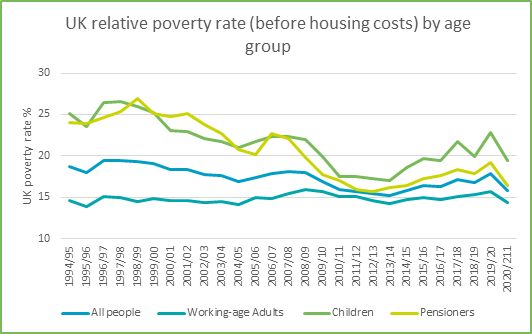 This chart shows relative poverty rates (BHC) overtime for different groups of the population. The relative poverty rate before housing costs (BHC) reduced slightly between 1994 and 2013, falling from 19% to 15%. It then rose steadily until 2019 but fell during the first year of Covid to its current level of 16%. Children and pensioners experienced significantly higher rates of poverty than working-age adults throughout the 90s and early 2000s, with the difference reducing to a gap of only 2% in 2013. Both rates have now risen, with children experiencing higher levels of poverty than the rest of the population. In both groups, poverty rates fell during the first year of the Covid-19 pandemic.

Absolute Poverty (BHC) in the UK 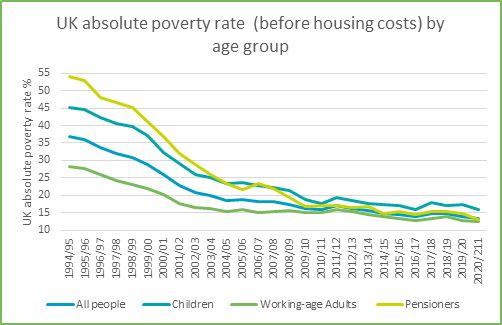 Relative Poverty (AHC) in the UK 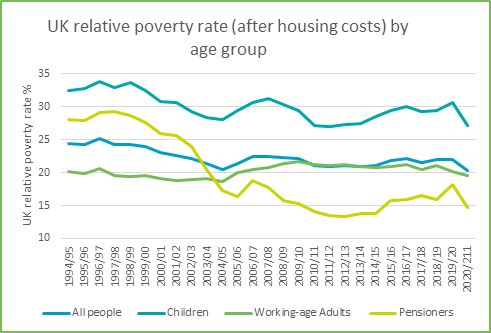 This chart shows relative rates overtime once housing costs are taken into account. Measuring poverty after housing costs (AHC) allows for a more accurate picture of the income a household has access to as all households face housing costs and looking at incomes once these costs are taken into account gives a better reflection of the resources available to the household. On this measure, the relative poverty rate for children has remained high throughout the last 28 years, fluctuating between 34% and 27%. In contrast, the poverty rate among pensioners has fallen substantially to a low of 13% in 2012/13, although it has since risen. Relative poverty (AHC) for all ages groups decreased between 2019/20 and 2020/21, with children poverty rates experiencing the largest fall, of 4%. The falls are likely a result of additional financial support provided to households at the onset of the Covid-19 pandemic.

Absolute Poverty (AHC) in the UK 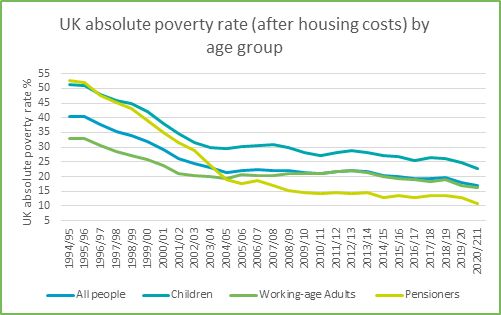 Measuring the Impacts of Poverty

In addition to calculating the changes to the rate of poverty in the UK over time, data can be gathered to assess the impacts of poverty in terms of material deprivation and food insecurity.

Material deprivation is the inability to afford basic resources and can be measured by asking households if they are able to afford a range of basic items and experiences. Due to the impact of Covid-19, a higher proportion of respondents answered that they didn’t want or need certain items and experiences, many of which were prevented by lockdown restrictions at various points during the survey year. As a result, the higher than normal proportion of respondents answering I don’t want/need this should not be viewed as indicative of wider changes in society. 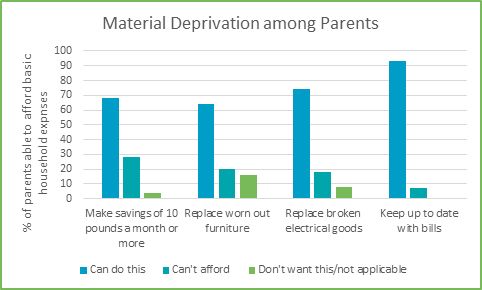 A significant proportion of parents experience material deprivation, with 28% unable to make savings of £10 or more per month and 18% unable to replace broken electrical goods. 7% of parents are unable to keep up to date with bills, while 20% couldn’t afford to replace worn out furniture. It’s important to note that this data was gathered in 2020/21 and does not reflect levels of material deprivation as a result of the cost of living crisis. 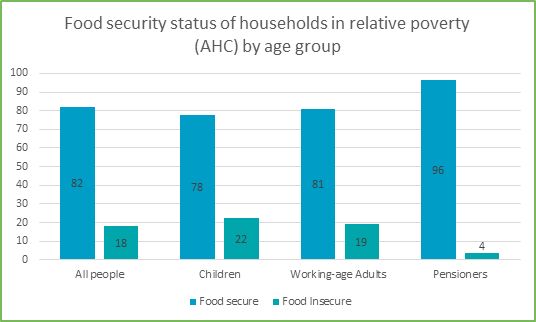 Please note, you can access further data on national poverty tends covering the period up to 2019/20 here.